Judgment in the matter is to be pronounced by November 17, the day the Chief Justice of India will demit office. 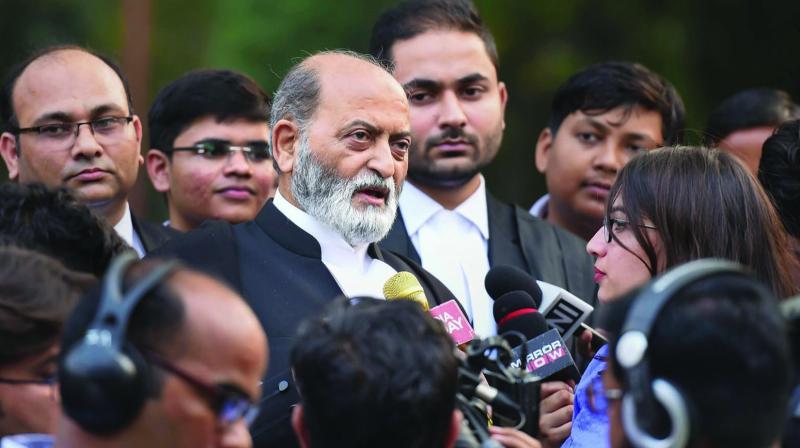 New Delhi: After marathon arguments that lasted for 40 days, the Supreme Court on Wednesday reserved its verdict on a batch of cross appeals filed by the Bhagwan Shri Ram Virajman, Nirmpohi Akhara, Sunni Waqf Board  and others against the 2010 Allahabad high court order trifurcating the disputed Ram Janmabhoomi-Babri Masjid site at Ayodhya.

The high court by its 2010 judgment had partitioned the disputed site in three parts, giving two parts to Hindus — the idol of Ram Lalla and Nirmohi Akhara, a Hindu sect — and one part to Muslims. However, the trifurcated disputed site was allocated in a way that the area under the dome of the now demolished Babri Masjid went to the Hindu side.

With the judgment reserved on Wednesday, the bench — also comprising Justices S.A. Bobde, D.Y. Chandrachud, Ashok Bhushan and Abdul Nazeer — have 32 days to write and pronounce their ruling with the deadline of November 17 — the day CJI Gogoi is due to retire.

At the outset of the hearing today, CJI Gogoi made it clear that the hearing had to conclude on Wednesday.

Saying, “enough is enough”, he said the hearing would conclude at 5 pm when they rise for the day. However, the hearing actually ended 50 minutes earlier as the CJI reserved judgment at 4.10 pm after Mr Dhavan concluded his arguments, reciting a couplet from well-known poet Iqbal.

At one stage, the hearing witnessed CJI Gogoi saying:  “I can go out, if it is going”. The CJI said this as many lawyers urged the bench to give them an opportunity to address the court on the issue.

Declining their request, the CJI said at the very outset of the hearing of the case on August 6, he had made it clear the parties on both sides had to adhere to the time schedule, leaving them to share the time among themselves. The warning from the CJI came as several lawyers persisted with their request to be heard.

The hearing also saw senior counsel Rajeev Dhavan tearing a map attached with the submission of senior counsel Vikas Singh, who appeared for the All India Hindu Mahasabha. The map showed the spot that is believed by Hindu parties as birthplace of Lord Ram.

The submission had a map from the 1985 book Ayodhya, by Hans Baker.

Mr Dhavan told the bench that map was from Baker’s 1985 book and could not relied upon in the case as all the material relating to the case was from 1950 to 1961. He invoked the legal doctrine of “Post Motim Utin” (barring the use of material beyond the case documents).

“You do what you want”, Chief Justice Gogoi said, indicating that he could tear it.

No sooner had Mr Dhavan tore the maps that there was commotion, which angered the judges. “Decorum has been spoiled, decorum is not maintained”, said the Chief Justice.

When the bench reassembled after lunch, Justice Nazeer said that the act of tearing the map had gone viral on the social media. At this, Mr Dhavan clarified that it was with the consent of the CJI, and CJI Gogoi agreed with him, saying that this too would go viral.

The hearing also saw Mr Dhavan chiding senior lawyer P.N. Mishra for his “lack of knowledge of the revenue laws during the Mughal period” and said his arguments were “foolish”. As Mr Mishra said he had written books on the laws of that period and people had got PhDs relying on his work, Mr Dhavan said: “I pity those PhDs.” Mr Mishra had appeared for a Hindu litigant.

The 40-day-long hearing saw the idol of Ram Lalla asserting a claim to the title of the disputed site, contending that in 1528 the Babri Masjid was built by demolishing the existing Ram temple, and cited the objects that surfaced in the course of the excavation ordered by the Allahabad high court. The excavation was undertaken by the ASI.

It was contended that the things that surfaced in the course of the excavation pointed to the existence of a huge structure supported by pillars, and described it as a temple.

Besides this, the proponents of a Ram temple at the Ram Janmasthan at Ayodhya have relied on oral evidence and the accounts of European and Chinese travellers who visited Ayodhya over the centuries. They also cited the East India Company gazetteer in support of their claim to the disputed site.

The hearing witnessed lawyers appearing for the idol of Ram Lalla asserting that the Ram Janmasthan itself was a “Swayambhu” — a manifestation of God on the lines of the Kedarnath and Badrinath temples.

They also referred to the Hindu law in support of their claim that once a temple, always a temple, whether or not at some point in history it had been destroyed and a mosque was built over it.

Similarly, the Sunni Waqf Board too relied on oral and documentary evidence in support of its claim to the title of the disputed site. They interpreted the archaeological findings at the disputed site to assert that it was an idgah.

It asserted that the Babri Masjid stood at the disputed site ever since it was constructed in 1528 by Empror Babur’s commander Mir Baqi till it was razed down on December 6, 1992. To buttress its claim, the Sunni Waqf Board pointed to the grants it was getting from Babur, and later by the British administration in India.