The statement came as a response to Sitharaman’s remark blaming Singh and Raghuram Rajan for the bank crisis. 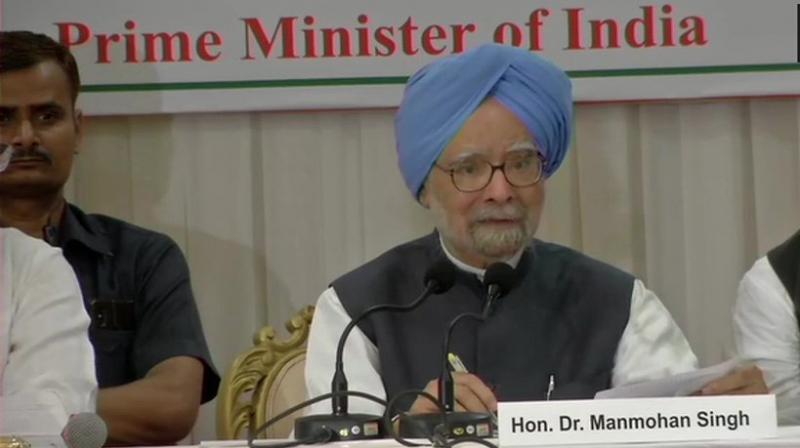 Former Prime Minister Manmohan Singh on Thursday said that the government ‘is obsessed with trying to fix blame on its opponents’ instead of finding solutions. (Photo: Twitter/ ANI)

New Delhi: Former Prime Minister Manmohan Singh on Thursday said that the government ‘is obsessed with trying to fix blame on its opponents’ instead of finding solutions. The statement came as a response to Union Finance Minister Nirmala Sitharaman’s remark blaming Singh and Raghuram Rajan for the bank crisis.

Addressing a press conference in Mumbai, Singh said: "I have just seen the statements by Finance Minister Nirmala Sitharaman. I won't like to comment on that statement, but before one can fix the economy, one needs a correct diagnosis of its ailments and their causes. The government is obsessed with trying to fix blame on its opponent, thus it is unable to find a solution that will ensure revival of the economy."

Speaking on PMC Bank scam, Singh made an appeal to PM Modi to resolve grievances of 16 lakh people affected.

“It’s very unfortunate what has happened in the case of this bank. I appeal to the Maharashtra CM, the PM and the finance minister to look into the matter and resolve the grievances of the affected 16 lakh people,” said the former PM.

“I expect the government of India, RBI and the Maharashtra government to put their head together and provide a credible, pragmatic and effective solution to this case where the depositors are trying for justice,” he added.

Manmohan Singh said that Maharashtra witnessed one of the highest factory shutdowns in past five years due to the "economic slowdown" in the country.

"Mumbai accounts for nearly one-third of India's direct tax collection. It is a true cosmopolitan hub and so to the Hindi and Marathi film industries. It is India's city of dreams. Sadly, the present slowdown and the government's apathy and incapability are affecting the future and aspirations of millions of our people," Singh said while addressing media in Mumbai.

"The much advertised double engine model of governance on which BJP seeks votes has utterly failed. Mumbai and Maharashtra have had to face some of the worst effects of grave economic slowdown. Manufacturing growth rate of Maharashtra has been declining for four consecutive years. Maharashtra has witnessed one of the highest factory shutdowns in the past five years," he added.

Assembly elections are slated to be held in Maharashtra on October 21, while counting of votes will take place on October 21.