Shivendraraje is contesting assembly poll from Satara while Udayanraje is in the fray for Satara LS by-poll. 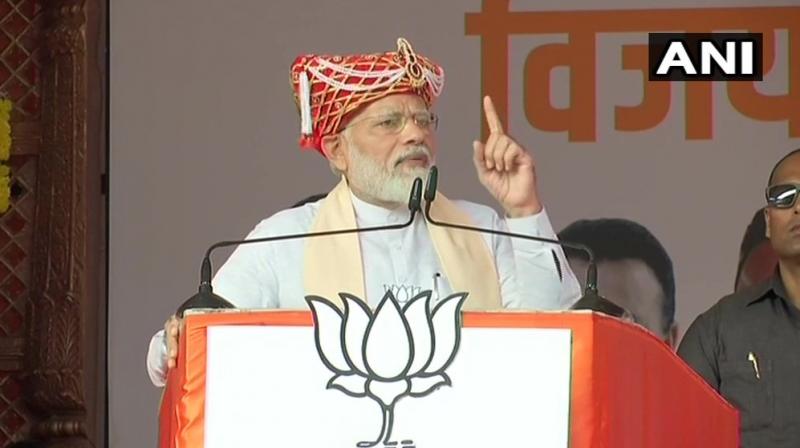 Hitting out at the Congress-NCP, Modi said the two parties opposed decisions taken in the interest of national security and national integration. (Photo: ANI)

Satara: Prime Minister Narendra Modi on Thursday asserted that his government adheres to Chhatrapati Shivaji Maharaj's principles of nationalism and national security, and possess the strength to give a befitting reply to those who have "evil designs" on India.

Addressing a campaign rally here for Udayanraje Bhosale for the October 21 Satara Lok Sabha by-poll, Modi said as Shivaji Maharaj did, his government too has worked to strengthen the defence forces.

"In the last five years, the Centre and the state government have adhered to the values of Shivaji Maharaj. Nationalism and national security are our top priority. Those having evil designs against the country will be given a befitting reply," he said. "We have taken decisions for national integration which earlier governments had no guts to take," he said.

Hitting out at the Congress-NCP, Modi said the two parties opposed decisions taken in the interest of national security and national integration.

The opposition's stand has caused deep hurt to Satara district which sends maximum number of soldiers to the Indian army, Modi said.

"In the land of `Rashtra Rakshaks' (nation's protectors), there is no place for those who speak against national interest," he said.

The Congress and NCP questioned the bravery of our soldiers, he alleged.

"They even spread false propaganda against Rafale (the deal to buy the French-made fighter jets) and their stand on abrogation of Article 370 has hurt the people of Satara," Modi said.

"They leave no chance to malign Veer Savarkar. Congress and NCP does not understand national sentiment. They were taught a lesson in the Lok Sabha elections and now Maharashtra and Haryana will also punish them severely (in assembly elections and bypolls)," he said.

Describing Satara as his "Guru Bhoomi", Modi said his mentor Laxman Inamdar hailed from Khatau village in the district.

"Earlier, we had only the sanskar (values) of Chhatrapati Shivaji Maharaj. Now we have his entire family with us," Modi said, referring to Shivendraraje Bhosale and Udayanraje Bhosale, descendants of Shivaji Maharaj, joining the BJP after quitting the NCP.

Shivendraraje is contesting assembly poll from Satara while Udayanraje is in the fray for the Satara Lok Sabha by-poll.

The prime minister said his government was committed to fulfilling Shivaji Maharaj's dream of "Ek Bharat, Shrestha Bharat" (United India, Great India). "We get new energy and strength from his ideals," Modi said.

"Then the issue of (NCP chief) Sharad Pawar himself entering the fray came up. But, Sharad-Rao being Sharad-Rao, he knows which way the wind is blowing and hence refused to contest," Modi said.

"There is "dangal" (chaos/fight) in the (Congress-NCP) alliance. These leaders want to show each other their place. While BJP and Shiv Sena have embarked on a mission to make Maharashtra great. If the alliance is divided, how can they work for a united Maharashtra. Their culture is divide and 'malai khao'(reap benefits). This is not the culture of Shivaji Maharaj," Modi said.