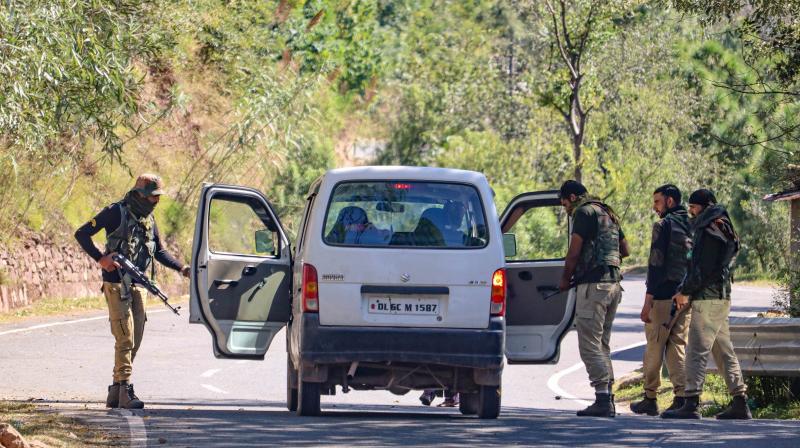 Security personnel stand guard near the site of an encounter with militants at the Nar Khas forest area in Poonch, Saturday. (PTI)

Srinagar: Anees-ul-Islam, grandson of late separatist patriarch Syed Ali Shah Geelani who was working as a research officer in a government institution in Srinagar has been dismissed from services "in the interest of the security of the state" by the Jammu and Kashmir Lieutenant Governor, Manoj Sinha.

A government teacher Farooq Ahmed Butt was also fired for similar reasons. Butt is reported to be the brother of a militant Muhammad Amin Butt who is a resident of J&K’s hilly district of Doda but is, as per the authorities, operating from Pakistan-occupied-Jammu and Kashmir (POJK) for some time. Separate orders issued by the General Administration Department (GDA)  of the J&K government read, “It is not expedient to hold an enquiry” in either case.

An official communique received by this newspaper said that the GDA has in its order issued on Saturday terminated the services of Anees-ul-Islam Research Officer in the Sher-e-Kashmir International Convention Centre (SKICC) here under sub-clause (c) of the proviso to clause (2) of Article 311 of the Constitution of India.

“The Lieutenant Governor hereby dismisses Mr. Anees-ul-Islam, Research Officer in SKICC from service with immediate effect in the interest of the security of the state…it is not expedient to hold an enquiry in the case,” the order reads.

Anees is the son of Altaf Ahmed Shah alias ‘Fantosh’ who is married to one of the daughters of Geelani and is presently lodged in Delhi’s Tihar jail in a case of alleged terror funding.

A separate order issued by the GDA says that the services of Butt, a teacher at a government school in Kathawa area of Doda have been terminated under the same provision of the Constitution.

The J&K government, while pursuing a tough policy against what it sees as their anti-national activities, their being in the government service a threat to the security and integrity of the country or their violating Government Servants Conduct Rules, has in the past two years dismissed a large number of its employees including teachers, revenue officials, engineers and policemen. Among those fired are Syed Shakeel Ahmed and Syed Shahid Yusuf, the sons of Hizb-ul-Mujahideen supreme Muhammad Yusuf Shah alias Syed Salahuddin.

The J&K government under Lt. Governor Sinha, had in April this year constituted a Special Task Force (STF) for identifying and scrutinizing its employees involved in any activity detrimental to the security of the country or deemed as anti-national, evoking sharp criticism from various political parties, employees’ trade unions and human rights activists.