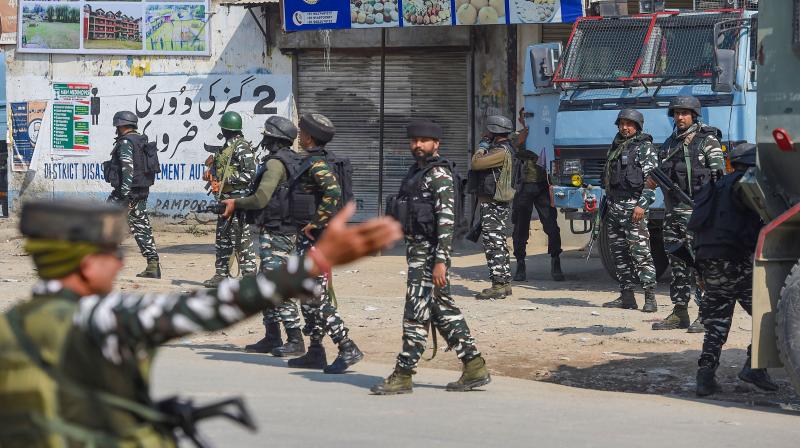 SRINAGAR: Two more civilians -- a Muslim and a Hindu non-local seasonal workers -- were gunned down by assailants in Jammu and Kashmir's capital city and southern Pulwama district on Saturday, taking the toll of targeting killings this month to nine.

Sagir Ahmed, a resident of Uttar Pradesh, who was working as a carpenter in a joinery mill in Pulwama was shot at and critically wounded by a masked youth inside a shop in the district’s Littar area late Saturday evening, witnesses said. He was rushed to the district hospital where doctors declared him dead.

Earlier, gunmen targeted a street-hawker from Bihar identified as Arvind Kumar in Srinagar’s idgah-Safa Kada’l area. He was taken to the nearby Sri Maharaja Hari Singh Hospital where he was declared dead on arrival. The medical superintendent of the government-run hospital, Dr Kanwaljeet Singh, said that the 40-year-old victim had received a bullet wound in the head.

The news of the tragic killings came hours after a senior officer of the Jammu and Kashmir police announced that five of the separatist militants involved in the recent spate of target killings in and outside Srinagar have been eliminated by the security forces in separate encounters in the past few days.

Earlier this month, seven civilians including a Kashmiri Pandit chemist Makhan Lal Bindroo, street-vendor from Bihar Virender Kumar Paswan, cab driver Muhammad Shaffi Lone, school principal Supinder Kour, teacher Deepak Chand (also a Kashmiri Pandit) and two other residents -- Abdul Majid Guroo and Muhammad Shafi Dar -- lost their lives in a fresh spate of target killings. The J&K police has blamed The Resistance Front (TRF) which it insists is an “offshoot” of proscribed Lashkar-e-Tayyaba (LeT) organisation for most of the 28 target killings that had taken place till October 7 this year and also many other terror activities in J&K.

The gory incidents sent the security agencies into a tizzy whereas the BJP government at the Centre and local administration faced the Opposition's heat. Also, questions were being raised over the official claim that the revocation of J&K’s special status granted under Article 370 of the Indian Constitution in August 2019 proved harbinger of peace and death knell for militancy and terrorism in the region.

As the J&K police, the Army and various Central other security forces on counterinsurgency assignment in J&K launched a major offensive against the militants past week, 13 militants, including at least five who were allegedly involved in target killings, were gunned down in encounters across the Valley, police said.

Inspector general of police Vijay Kumar said on Saturday afternoon that two militants including a TRF-LeT commander Umar Mushtaq Khanday who figured in the list of "most wanted terrorists" and his associate Shahid Khursheed were killed in a gunbattle with the security forces at Drangbal, Pampore area of Pulwama earlier during the day. He said that the duo had been trapped in a concrete three-storey building after the security forces launched a cordon-and-search operation in the area late Friday night. “We offered them (to) surrender, but they opened fire at the security forces, triggering an encounter. We fired (rocket-propelled) grenades and the building caught fire. Both the terrorists were killed,” he said.

He said that Khanday was involved in the recent killing of two J&K policemen in Srinagar’s Baghat area. “As per police records, both the killed terrorists were collaborators in recent killings in Srinagar and involved in several other terror crimes. Umer Mushtaq was also involved in the killing of senior-grade constable Muhammad Yusuf and constable Suhail Ahmad in Baghat area and figured among the list of top 10 most wanted terrorists,” a statement issued by the police here added.

On Friday, the security forces had claimed to have killed two militants identified by them as Shahid Bashir Sheikh and Mukhtar Shah. IGP Kumar said that after carrying out target killings in Srinagar earlier this month Shahid Khursheed and Shahid Bashir shifted their base to Pulwama while their other associate Mukhtar Shah relocated to neighbouring Shopian district “but the three terrorists have now been eliminated”.

He asserted that the police are committed to hunting down all militants “who try to create fear among masses and spread mischief and tumult in the Valley.” He added, “Such elements and their names should be excised from the society”.

The IGP said that post-recent civilian killings, as many as 13 militants have been killed in nine different anti-terror operations in the Valley and that now only two active militants from Srinagar namely Mehran and Wasim are at large and that “all efforts are on to nab them”.

Asked if the recent spate of target killings was a security lapse, Mr Kumar said, “There was no such lapse as terrorists chose soft targets”. He added, “It is not possible for us to give protection to one and all, but yes, those who are vulnerable will be protected.”