Former Deputy CM of Bihar and Lalu's son Tejashwi tweeted, 'Rahul Gandhi invited me for lunch. I feel grateful and thank him for that.' 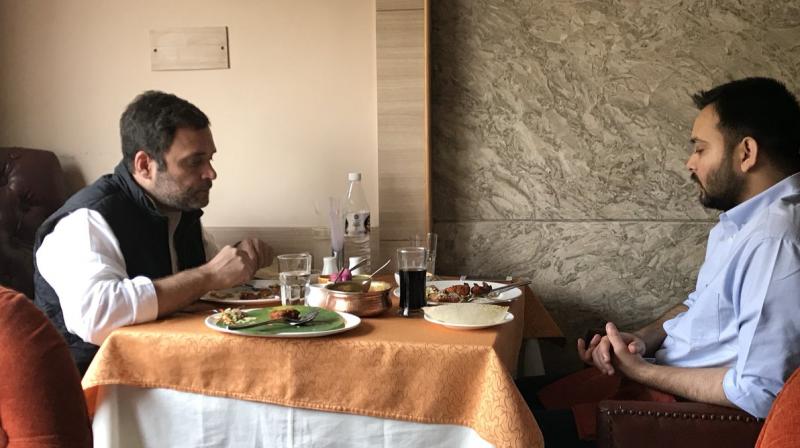 Patna: Rashtriya Janata Dal (RJD) Chief Lalu Yadav’s younger son Tejashwi Yadav having a one on one luncheon meeting with Congress vice president Rahul Gandhi has created a flutter in the state politics.

“Rahul Gandhi invited me for lunch. I feel grateful and thank him for that”, Former Deputy Chief Minister Tejashwi Yadav said on twitter and also released photographs of the meeting on Friday.

Thank you @OfficeOfRG for taking me out for wonderful lunch. Feel appreciated and grateful. Again thanks for taking out time out of ur tight schedule. pic.twitter.com/wqIg8Ss3xm

He, however, did not reveal what transpired between them but RJD insiders claim that “both the leaders met to discuss political situation of the state”.

Political observers are also discussing the timing of the meeting as few leaders in the state unit of the Congress party had started staking claims on Araria Lok Seat which is a minority – dominated constituency and was earlier held by RJD.

The seat fell vacant after the sudden demise of RJD MP Mohammad Taslimuddin in September this year.

“Congress party must contest from a minority-dominated constituency in order to fight against communal forces. Congress is a national party and it should contest from Araria Lok Sabha constituency”, Congress leader Ashok Chaudhary who was removed as state unit chief in September had floated the idea on Thursday in Patna.

The rift had widened between RJD and Congress after a section led by former Congress state president Ashok Chaudhary had started opposing party’s alliance with RJD after Chief Minister Nitish Kumar dumped the grand secular alliance and formed a government with the BJP in July this year.

A sizeable number of Congress party legislators had even urged Rahul Gandhi to snap ties with RJD Chief Lalu Yadav who is facing a string corruption charges.

Ashok Chaudhary was removed from the post of state unit chief in September on the reports that he was trying engineer a split in Bihar Congress in favor of Bihar Chief Minister Nitish Kumar.