India   All India  17 Nov 2017  How her grit and sagacity created the mystique of Indira Gandhi
India, All India

How her grit and sagacity created the mystique of Indira Gandhi

We briefly examine here the events of 1966 and 1967 relating to her election as leader of the Congress Parliamentary Party and thus Prime Minister. 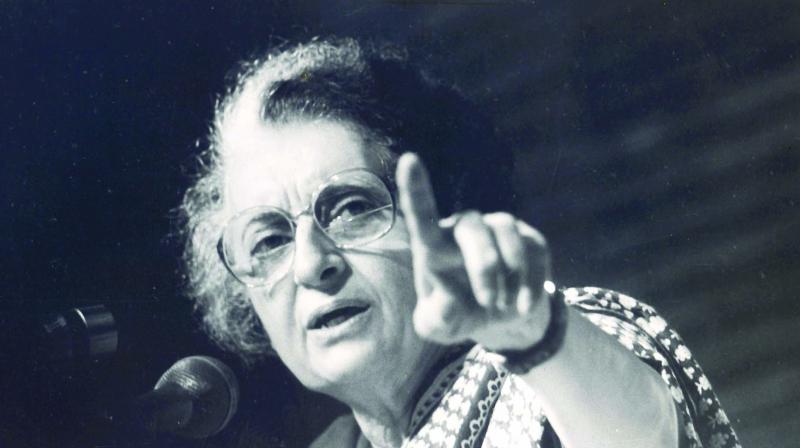 After Pandit Jawaharlal Nehru, Indira Gandhi has been India’s longest serving Prime Minister. While Nehru was the country’s head of government for nearly 17 years, from August 15, 1947 to May 27, 1964, his daughter was Prime Minister for over 16 years in two phases — from January 24, 1966 to March 1977 and again from January 1980 to October 31, 1984, when she was tragically assassinated.

Though the re-election of Indira in 1971, following a mid-term poll, and in 1980 was a smooth and unchallenged affair, she had to face a formidable challenge in her election as Prime Minister in 1966, and subsequent re-election the following year. We briefly examine here the events of 1966 and 1967 relating to her election as leader of the Congress Parliamentary Party and thus Prime Minister.

After the sudden death of India’s second Prime Minister, Lal Bahadur Shastri, in Tashkent on January 11, 1966 following the historic Tashkent accord between India and Pakistan, the Congress had had to immediately choose his successor. As after the death of Jawaharlal Nehru, on May 27, 1964, Gulzarilal Nanda, home minister, was made interim PM till the election of the new CPP leader. And as in 1964, Nanda, however feebly, threw his hat into the ring.  Though the names of defence minister Y.B. Chavan and Jagjivan Ram were also doing the rounds, the main contest narrowed down to Indira Gandhi and Morarji Desai, who had earlier lost out in the race to Lal Bahadur Shastri.

K. Kamaraj, who was Congress president, had managed to avert a contest in the CPP by the “consensus” formula after Pandit Nehru’s death, but this time he could not as Morarji Desai was determined not to withdraw. Kamaraj was equally determined to ensure that Indira Gandhi won. He is believed to have shared his sentiments with a colleague accompanying him on the flight from Chennai (then Madras) to Delhi:

She knows all the world leaders, has travelled widely with her father, has grown up amongst the great men of the freedom movement, has a rational and modern mind, is totally free of any parochialism — state, caste or religion. She has possibly inherited her father’s scientific temper and, above all, in 1967 she can win the election.

Even though the election of the CPP leader was restricted to Members of Parliament from both Houses, getting the moral and public support of the chief ministers was considered crucial. Between Kamaraj and D.P. Mishra, the support of a majority of CMs for Mrs Gandhi was worked out painstakingly. The exception was Sucheta Kripalini of Uttar Pradesh. But that didn’t matter much as a majority of MPs from UP supported Mrs Gandhi.  With all efforts for consensus not materialising, January 19, 1966 was fixed as the date to elect the new CPP leader. Before she went to Parliament House, Mrs Gandhi visited Rajghat to pay homage to Mahatma Gandhi and to Teen Murti to feel the spirit of her illustrious father.

When the ballot papers were counted the results showed Mrs Gandhi winning by 186 votes.  She had polled 355 votes, against 169 of Morarji Desai.  Mrs Gandhi was sworn in as India’s third Prime Minister on January 24, 1966.

Only a year later, in 1967, the general election to the Lok Sabha was held. Even though the Congress won 285 seats with 41 per cent of votes, its tally came down heavily from 369 in the previous Lok Sabha.

A number of Congress stalwarts, including Congress president Kamaraj, lost the election, as did S.K.  Patil in Maharashtra and Atulya Ghosh in West Bengal. However, Mrs Gandhi won from Rae Bareli with a huge margin. This put her in a much stronger position. But the old guard would not give up without a fight and now tried to pitch Morarji Desai against her. By this time Congress president Kamaraj had become disillusioned with Mrs Gandhi and, along with the Syndicate, toyed with the idea making Morarji Desai the new PM. But having bitten the dust in his home state Madras (now Tamil Nadu), Kamaraj’s authority had eroded and so had that of several senior leaders who had either lost themselves or the states they belonged to. Kamaraj, however, did not openly support Morarji Desai and remained non-committal.

Some senior ministers — Y.B. Chavan, Ashok Mehta and Dinesh Singh — took the view that Mrs Gandhi should not compromise with Desai. However, taking everyone by surprise, Mrs Gandhi called on Morarji Desai and the leadership issue was resolved. Morarji Desai was offered and accepted the deputy prime ministership and with it the finance portfolio, even though he was keen on home.

After her re-election as PM, Indira Gandhi was now in a much stronger position and, from this position of strength, dealt with another immediate problem with great tenacity and political wisdom — the election of the third President of India.

Dr S. Radhakrishnan, who had succeeded Dr Rajendra Prasad after two terms as vice-president, was due to retire. Mrs Gandhi was not inclined to give him a second term and decided on the candidature of vice-president Zakir Hussain. Durga Das, in his magnum opus India from Curzon to Nehru and After, writes:

But Hussain was not chosen on the basis of communal consideration. He was chosen because of the distinction and success with which he had held the office of Vice-President and the patriotic and non-partisan way in which he had conducted himself. She did not favour a second term for Radhakrishnan and in consultation with Desai, boldly sponsored Hussain’s candidature. The move received moral strength when Desai insisted that the Congress show its disapproval of the manner in which Subba Rao had made the office of Chief Justice of India a subject of controversy by agreeing to resign and stand for election. This was perhaps the last time that Morarji Desai would support a proposal of Mrs Gandhi. Soon they would fall apart, and the rest is history.

Though her bold and courageous leadership leading to India’s grand victory in the 1971 war and the creation of Bangladesh is now part of contemporary history, Indira Gandhi’s other monumental achievements like ushering in the green revolution, lifting millions above the poverty line, strengthening secularism, enhancing India’s global prestige and, above all, her martyrdom to preserve the nation’s unity and integrity, will never be forgotten by a grateful nation.

The writer, an ex-Army officer, former member of the National Commission for Minorities and an ex-AICC secretary, is a Delhi-based political analyst