The students' union has said it will take out a march to Parliament on Monday, when the winter session will begin. 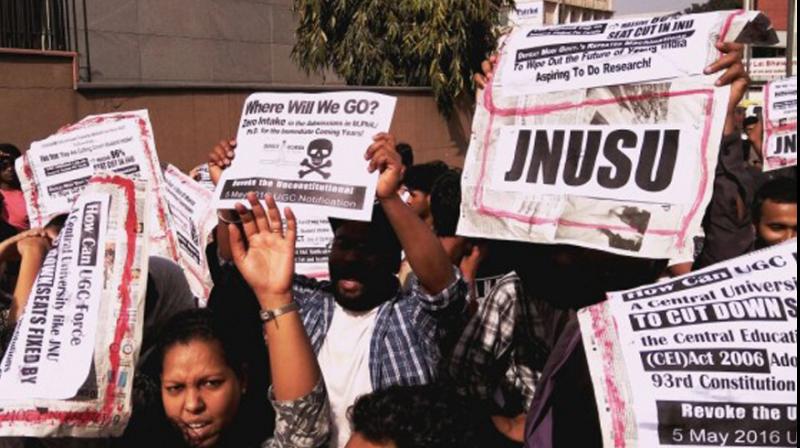 The students have been protesting for nearly three weeks against the draft hostel manual, which had provisions for hostel fee hike, dress code and curfew timings. (Photo: File)

New Delhi: A section of Jawaharlal Nehru University teachers on Sunday said the JNU administration was open to dialogue with elected hostel representatives but not with the "non-notified" students' union to end the standoff by students over the hike in hostel fees.

"The administration has announced a partial rollback and we are open to dialogue. We are ready to talk to the elected hostel representatives and work out the modalities," he said.

Asked about the students' union, Kadam said, "Why should we talk to them when they are not notified?" He added that the administration is open to dialogue but only with the elected representatives and not the "non-notified" union.

The students have been protesting for nearly three weeks against the draft hostel manual, which had provisions for hostel fee hike, dress code and curfew timings.

Last week, after the protest spilled over, the JNU administration partially rolled back the increase in hostel fees and removed the deadline for students to return to their hostels and suggested dress code for them.

Still, the students continued their protest, saying the decisions did not address their grievances completely and termed the roll back an "eyewash".

The students, however, said the administration has been issuing "thinly veiled threats" to them and teachers supporting them.

On Sunday, professor Vandana Mishra, an associate dean of the university, said she was confined to her classroom for nearly 28 hours, allegedly by members of the students' union.

Mishra said the fees were hiked because the University Grants Commission has directed universities to generate internal receipts for hostels.

"When I refused to agree, they asked me sign on a pre-drafted resignation letter. I refused to sign it and they confined me," she said.

Mishra said the students did not offer any alternatives to what could be done but were misbehaving with her. "It is our appeal to students to resume classes. The semester-end exams are near and academic work has to be done," she said.

Meanwhile, the university registrar Pramod Kumar also appealed to students to get back to classes. "Due to the ongoing strike by a group of students, thousands of students who wish to participate in the JNU academic programmes and plan to complete their academic requirements for continuance in the university, are adversely affected," he said.

"It is in the interest of the students to adhere to the academic norms and academic calendar of the university according to which they need to appear in the end-semester examination that commences from December 12," he said.

The last date for submission of M.Phil. dissertation/Ph.D. thesis in the schools and forwarding the same to the evaluation branch is December 31 for the monsoon semester.

"Since the academic calender has been approved by the Academic Council and the Executive Council, there is going to be no relaxation in the above deadlines," he said.

If the academic requirements are not met in time, thousands of students may be affected damaging their future career prospects, he added.

The students' union has said it will take out a march to Parliament on Monday, when the winter session will begin, to protest against the hostel fee hike and appeal MPs to take up their cause.