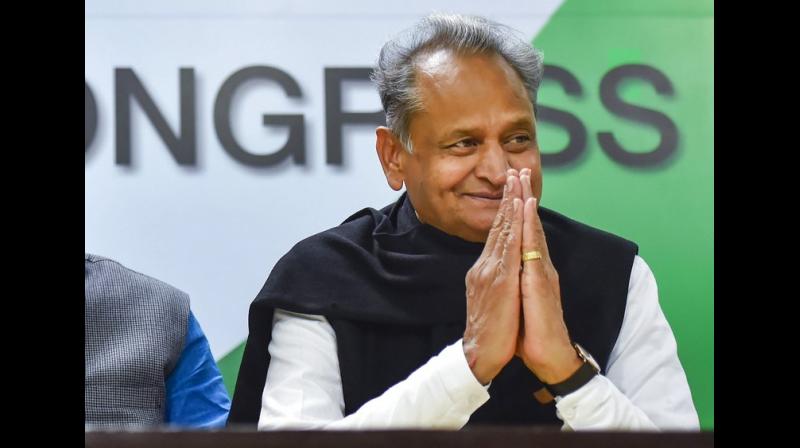 Ashok Gehlot is the fourth leader to become chief minister of Rajasthan for a third time. (Photo: File | PTI)

Rajasthan Congress President Sachin Pilot, who was also eyeing for the Chief Ministerial post, took oath as the Deputy Chief Minister of the state.

The swearing-in ceremony took place at the historic Albert Hall in Jaipur.

Several senior Congress leaders and hundreds of party workers attended the event, which also saw the presence of other opposition leaders.

On December 11, the Congress emerged as the single largest party by winning 99 out of 199 seats in Rajasthan.

67-year-old Ashok Gehlot first became the chief minister of the state in 1998.

Gehlot's second stint as the Chief Minister of Rajasthan was from 2008-2013.

Apart from being the CM twice earlier, he has won a series of Lok Sabha and assembly elections from the state and headed the Rajasthan Pradesh Congress Committee four times.

Gehlot was first elected to Parliament in 1980, and went on to win Lok Sabha elections four more times.

Since 1999, he has represented the Sardarpura Assembly constituency, winning five consecutive terms in the House.
At the Centre, Gehlot has served as a minister of state in the ministries of tourism, civil aviation, sports and textiles, in different stints between 1982 and 1993.

He was also the AICC general secretary in charge of Delhi and the party's Sewa Dal from 2004-2009 and member of the Congress Working Committee looking after Himachal Pradesh and Chhattisgarh.

Ashok Gehlot is a graduate in science, a postgraduate in economics and has studied law. He is married to Sunita Gehlot and has a daughter and a son.