The Transgender Persons (Protection of Rights) Bill, 2016, seeks to define transgenders and prohibit discrimination against them. 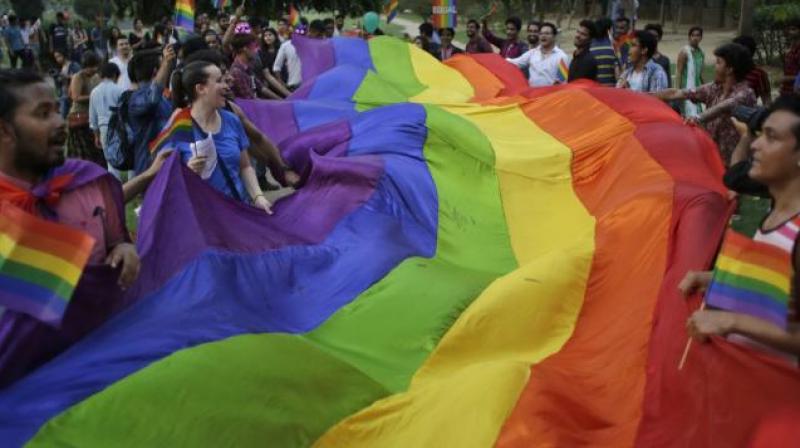 Social Justice and Empowerment Minister Thawar Chand Gehlot said objectives of bill includes protecting interests of transgenders, defining of term 'transgender', to give them recognition and setting up of a national transgender council. (Representational Photo: AP)

New Delhi: Amid noisy protests over the Rafale deal and Cauvery issue, the Lok Sabha on Monday passed a bill seeking to empower the transgender community by providing them a separate identity.

The Transgender Persons (Protection of Rights) Bill, 2016, seeking to define transgenders and prohibit discrimination against them, was introduced in the Lok Sabha two years ago.

It was passed with 27 amendments.

Amid the din, five members, including Kakoli Ghosh Dastidar (All India Trinamool Congress) and Badaruddoza Khan (CPI-M), participated in the debate, questioning the provisions of the legislation.

The amendments moved by the government, along with some others moved by opposition members, were considered.

Dastidar said the bill was hastily drafted and the different clauses mentioned in it were totally inconclusive.

"First we have to define what transgender means....This bill has to be returned," she said, adding that a properly drafted bill had to be tabled.

In the midst of the uproar, Parliamentary Affairs Minister Narendra Singh Tomar said the government was ready for any kind of discussion.

Union Social Justice and Empowerment Minister Thawar Chand Gehlot said that the bill was sent to standing committee and the government has accepted 27 amendments.

Khan said that the definition of the transgender mentioned in the bill was not clear.

Earlier, seeking passage of the bill, Social Justice and Empowerment Minister Thawar Chand Gehlot said the bill was complete and there was no need for more discussion.

He said the objectives of the bill includes protecting interests of transgenders, defining of the term 'transgender', to give them recognition and setting up of a national transgender council.

"A long discussion has taken place on this issue. It has also gone to the parliamentary standing committee. We have included several of their suggestions," he said.

Initiating the debate on the bill, Congress member Shashi Tharoor said the bill was "flawed" and the minister should withdraw it.

"Defer consideration of the bill as it needs serious discussion. I request the minister to withdraw the bill," he said.

"We need to recognise transgenders' identity" as it goes beyond male and female, Tharoor said, adding the government has "blindly" borrowed the definition of transgenders.

"The bill also fails to define discrimination against transgenders," and there is a need to redraft certain clauses, he said.

B Mahtab (BJD) said there was no clarity on the term "self perceived gender identity" and "how it will be enforced".

He said the definition of transgenders was not complete and that other terms such as transmen and transwomen were not defined. Mahtab said there were several laws in the country and it was not clear how these laws including the Companies Act would be applied to transgenders.

"Adequate attention has not been given in drafting this bill," he maintained, adding the government itself has moved 27 amendments. Supriya Sule (NCP) said a transgender commission at the national level was not enough.

"We are asking for a welfare board for transgenders. They need equal rights," she said, demanding a helpline number for the community.