Stalin also lashed out at PM Narendra Modi as a ‘sadist’ who found no time for visiting Gaja-hit Tamils. 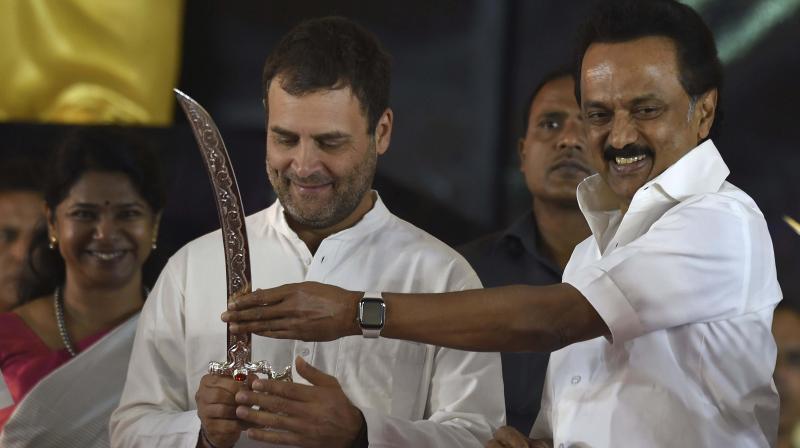 Congress president Rahul Gandhi is being presented a sword by DMK president M.K. Stalin at a public meeting after unveiling a life-size bronze statue of late chief minister and DMK president M. Karunanidhi at YMCA ground in Chennai on Sunday. (Photo: PTI)

Chennai: Taking the lead over his national allies, DMK president MK Stalin on Sunday proposed his Congress counterpart Rahul Gandhi for Prime Ministership in the 2019 Lok Sabha polls. He also lashed out at Prime Minister Narendra Modi as a ‘sadist’ who found no time for visiting Gaja-hit Tamils.

With top national leaders like the Kerala Chief Minister Pinnarayi Vijayan, AP chief minister N. Chandrababu Naidu and CPI MP D. Raja sharing his dais for the unveiling of a bronze statue of his late father M. Karunanidhi here, Stalin became the first leader of the emerging anti-BJP coalition to name Rahul for PM’s post - even the Congress party has not so far named him as its candidate for the top post.

Perhaps the Opposition leaders have refrained from naming a PM candidate for fear of triggering a conflict among its various personalities to the advantage of the BJP, but Stalin’s assertion now could launch a fresh bid from the Congress to consolidate on the DMK’s goodwill for its scion. Stalin did some good for the coalition by seating long-time rivals Sonia Gandhi and Naidu next to each other, so they could exchange smiles and pleasant conversation. Launching a fierce attack on Prime Minister Modi, Stalin said he had “traits of a sadist”.

“I have not ever used such words against any leader but now I am saying ‘sadist’ because the Prime Minister has no concern for Tamil Nadu. Would he not visit Maharashtra or Gujarat if a tragedy like this (Gaja) had hit them? Why such indifferent attitude towards Tamil Nadu”, Stalin thundered.

Recalling the famous exhortation from his father Karunanidhi to Indira Gandhi in 1980 to provide a stable leadership — ‘Nehruvin magazhey varuga, nilayana aatchi tharuga’ — and again his call to Sonia Gandhi to take up PM post in 2004, Stalin said he was likewise proposing Rahul Gandhi as the PM candidate of the Opposition Coalition in the 2019 Lok Sabha elections.

“As the son of Kalaignar, I propose that we will all work together to instal a new Prime Minister in Delhi. I propose the candidature of Rahul Gandhi from Tamil Nadu. Rahul Gandhi has the capability to defeat the fascist Modi government”, thundered Stalin as the audience burst into applause.