India   All India  17 Dec 2018  Will be on hunger strike till Kamal Nath is replaced as MP CM: Delhi BJP leader
India, All India

Will be on hunger strike till Kamal Nath is replaced as MP CM: Delhi BJP leader

The BJP leader alleged that Kamal Nath, nominated for the Chief Minister’s post in Madhya Pradesh, was involved in the anti-Sikh riots. 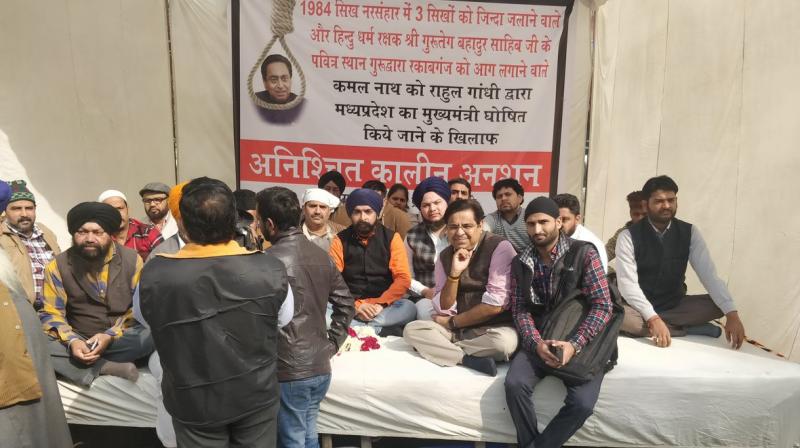 New Delhi: A Delhi BJP leader on Monday sat on an indefinite hunger strike against Kamal Nath being nominated for the Chief Minister’s post in Madhya Pradesh, alleging that the Congress leader was involved in the anti-Sikh riots.

Kamal Nath will be sworn in as the chief minister of Madhya Pradesh on Monday. Tajinder Pal Singh Bagga started his hunger strike at Tilak Nagar in west Delhi where several families affected in the 1984 anti-Sikh riots live.

Protesting the Congress' move in selecting Kamal Nath for the chief minister's post, Bagga said: "I am sitting on an indefinite hunger strike against Rahul Gandhi's decision to nominate him as CM. He (Kamal Nath) is the same person who was involved in the riots against Sikhs in Delhi."

He said his hunger strike will continue till Kamal Nath is replaced by someone else as the Chief Minister of Madhya Pradesh.

BJP leader and Leader of Opposition in the Delhi Assembly Vijender Gupta said the Congress has "hurt" Sikh sentiments by appointing Kamal Nath as the Chief Minister.