India   All India  18 Jan 2017  Kashmir Valley remains cut off due to snowfall
India, All India

Kashmir Valley remains cut off due to snowfall

However, air-traffic was restored on Wednesday as weather improved. 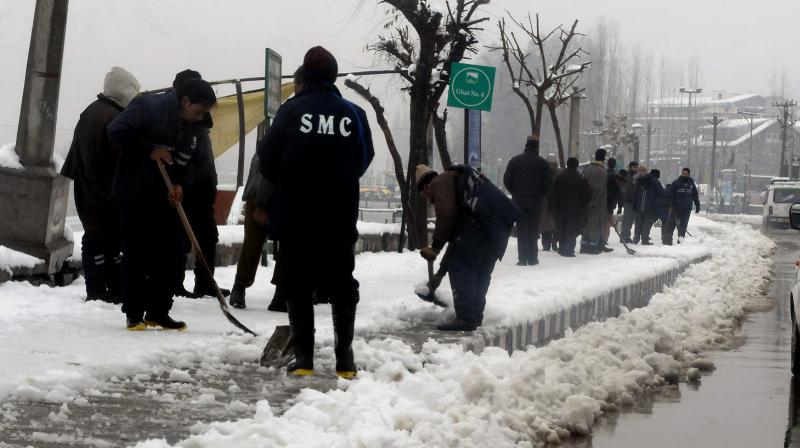 Kashmir remained cut off from the rest of the country for the second day today due to heavy snowfall in many areas. (Photo: File)

Srinagar: The Kashmir Valley remained cut-off from rest of the country for the second consecutive day on Wednesday due to snowfall as the Srinagar-Jammu National Highway could not be restored for vehicular traffic, even as air-traffic was restored as the weather improved here.

"The national highway is still closed for traffic. No fresh traffic would be allowed to ply on the highway on Wednesday," a traffic department official said.

Intermittent snowfall in Qazigund-Banihal stretch of the nearly 300-km long highway is hampering the efforts to restore traffic, he said, adding, "Once the weather improves, the operation will be launched and the first priority will be given to stranded vehicles to reach their destination."

The snowfall, which began on Monday, also affected air-traffic at Srinagar airport.

Only one aeroplane was able to land at the airport on Tuesday but even that could not then take-off due to bad weather. All other flights had to be cancelled which led many passengers stranded, Director, Airport Authority of India (AAI), Srinagar Airport, said Sharad Kumar.

Meanwhile, as the weather improved in Srinagar, air-traffic was restored.

Meanwhile, the Meteorological Department here said the weather would improve from on Thursday.

"The weather will improve from Thursday. In fact, it could improve from Wednesday only and it would stay as such till January 21. From January 22 to 26 evening or 27 morning, there is possibility of another spell of rains or snow as the region will be hit by a fresh western disturbance," a MeT official said.

Since Wednesday, Srinagar recorded nine cm of snowfall, while the minimum temperature dropped to minus 2.5 degrees Celsius from the previous night's minus 1.9 degrees Celsius, the official said.

Leh in the frontier region of Ladakh was the coldest recorded place in the state with a low of minus 13.1 degrees Celsius, compared to the previous night's minus 13.7 degrees Celsius.

Qazigund witnessed around 1.5 feet of fresh snowfall in the last 24 hours and the town registered a low of minus 3.8 degrees Celsius, he said.

Pahalgam in south Kashmir, which serves as a base camp for the annual Amarnath Yatra, received 19 cm snow fall while the minimum temperature was minus 4 degrees Celsius an increase of eight degrees from the previous night's minus 12 degrees Celsius, the official said.

The famous ski-resort of Gulmarg, recorded a low of minus 9 degrees Celsius, against minus 10.2 degrees Celsius on Wednesday. It witnessed five cm of snowfall.

The MeT official said many other places in the high altitude areas of the Valley experienced snowfall between two to five feet over the last two days.

Kashmir is currently under the grip of 'Chillai-Kalan' considered the harshest period of winter, when the chances of snowfall are most frequent and maximum and the temperature drops considerably. 'Chillai-Kalan', which, began on December 21 last year, ends on January 31, but the cold wave continues even after that.