'Didi' with short hair attacked me with knife to call off school: 6-yr-old UP boy

The six-year-old boy has deep wounds on the chest and stomach, but is said to be out of danger. 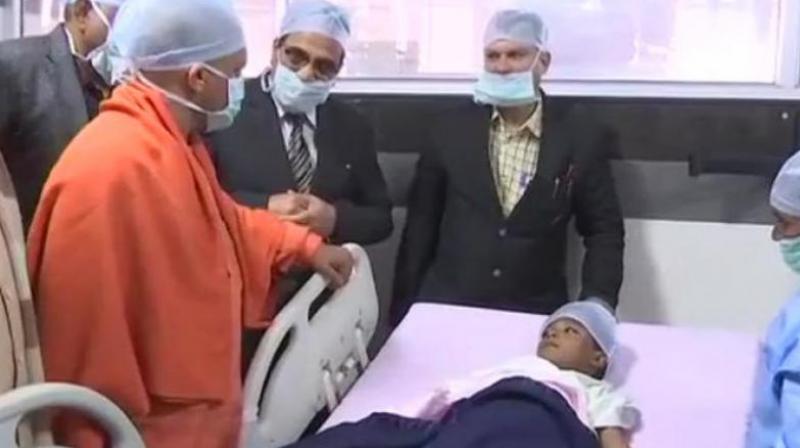 Lucknow: Days after 7-year-old Pradyuman Thakur was found lying in a pool of blood with his throat slit in a bathroom of Ryan International School in Gurgaon, another horrific incident surfaced from Lucknow in Uttar Pradesh. A student of Class 1 was attacked with a kitchen knife, allegedly by a senior, in the toilet of a school.

A Class 6 girl attacked the child, the police said. The principal of the school has been arrested for negligence.

The six-year-old boy Hrithik was found bleeding profusely and unconscious in a toilet of Brightland School in Triveni Nagar locality of Lucknow on Tuesday morning.

Hrithik received deep wounds on the chest and stomach, but is said to be out of danger.

According to reports, the boy told police that a 'didi' sporting a boy-cut hairstyle first took him to the bathroom, thrashed him, and then stabbed him with a kitchen knife. He told his parents and police that he could identify the girl.

"I was informed by the school that my son is injured. He has been attacked with a knife by a girl," said the boy's father.

According to a report in NDTV, the Class 6 girl told Hritik, "If I attack you and harm you, only then will the school announce a holiday."

Meanwhile, school officials suspect a connection to the deadly "Blue Whale" game, which involves a set of violent tasks that end in suicide.

The six-year-old was rushed to the Trauma Centre from school. Dr Sandeep Tewari, who was treating the boy, said the wounds "seem to have been inflicted with a knife-like sharp object".

Soon after the news of the attack spread across the school on Wednesday, most parents panicked and questioned about safety of their wards. Parents also accused the school of trying to hush up the incident.

The director of the school, Veena Vyas, said, "I am taking all precautions in view of the Ryan International school case. We are also looking at whether it is due to the deadly game 'Blue Whale Challenge'."

She said footage from around 70 security cameras in the school was being examined.

Officials said the bathroom on the second floor was sealed on Wednesday and police were looking for the accused.

Another report quoted a teacher from the school saying that though all closed-circuit televisions in the school were functional, there was no CCTV near the bathroom and hence it was becoming difficult to zero in on the accused girl.

On September 8, 2017, Class 2 student Pradyuman Thakur of Ryan International School, Bhondsi in Gurgoan had sparked widespread outrage across the country, leading to demands for enhanced security measures in schools.

A school bus conductor was initially suspected to have killed Pradyuman, although the needle of suspicion later moved to a 16-year-old student of the same school, who allegedly wanted to postpone an exam and a parent-teacher meeting at all costs.