Congress MLA Ramesh Jarkiholi is believed to be upset with his party after he was dropped from Karnataka cabinet on Dec 22. 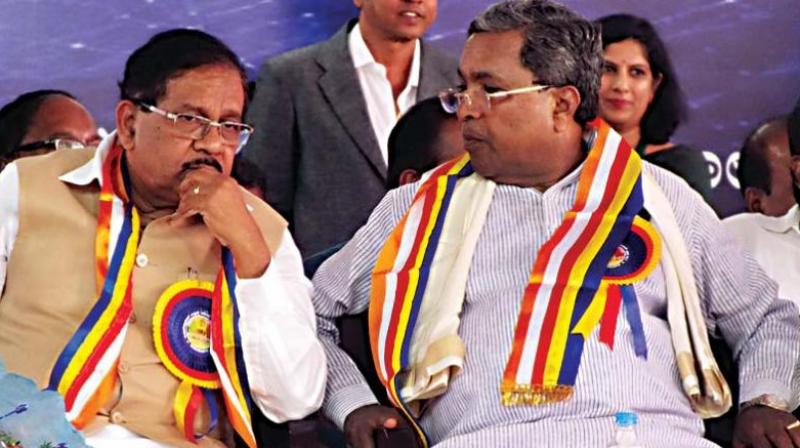 Talking about the CLP meeting, G Parameshwara said upcoming Lok Sabha elections and other issues like present political scenario in Karnataka will be discussed in the meeting. (Photo: File)

Bengaluru: Congress CLP leader Siddaramaiah has asked Karnataka Forest and Environment Minister Satish Jarkiholi to call up his brother and disgruntled MLA Ramesh Jarkiholi and tell him to attend the Congress Legislature Party (CLP) meeting to be held later on Friday.

Congress MLA Ramesh Jarkiholi is believed to be upset with his party after he was dropped from the Karnataka cabinet on December 22. The BJP is reportedly trying to woo him in order to topple the Karnataka government.

The BJP is also asking him to mobilise other disgruntled MLAs from the Congress who lost the Cabinet berth like him to bring down the incumbent Congress-JD(S) coalition government and form its own government.

Speaking to media, Siddaramaiah said: "I spoke to Satish Jarkiholi to call up Ramesh Jarkiholi and ask him to attend the CLP meet. I am not ordering them. It is a BJP's allegation. (BS) Yeddyurappa was chief minister and has been alleging against me of poaching. Does he have any self respect?"

Meanwhile, coming down heavily on BJP leader B S Yeddyurappa and accusing him of horse-trading, Karnataka Deputy Chief Minister G Parameshwara said that the BJP has stooped down to a low level and is approaching the Congress MLAs to topple the incumbent government.

"Yeddyurappa is president of BJP, he need not worry about the Congress MLAs, and all our MLAs will attend the CLP meeting. It is pathetic that BJP stooped to this level. They approached our MLAs and are still doing it but they will not succeed," Parameshwara said.

Talking about the CLP meeting, Parameshwara said that upcoming Lok Sabha elections and other issues like present political scenario in Karnataka will be discussed in the CLP meeting, which is going to take place on Friday in Bengaluru.

"CLP leader Siddaramaiah has called for a meeting. We will discuss about Lok Sabha elections and other issues including present political developments. All the MLAs will attend, including those whom you are saying disgruntled," he said.

After allegations and counter-allegations of poaching have cast shadow on the state government led by Chief Minister HD Kumaraswamy, the Congress has called a meeting of its legislators today to take stock of the prevailing political situation.

Former Karnataka Chief Minister and Congress leader Siddaramaiah issued a warning of strict action under the anti-defection law against those MLAs who abstain from the meeting. He even threatened them with the possibility of expulsion from the party.

Karnataka was thrown into a political frenzy on Monday when Congress leaders alleged that three of their MLAs were taken to Mumbai by the BJP in an attempt to lure them to their fold. This was followed by two Independent MLAs -- R Shankar and H Nagesh -- withdrawing their support from the Congress-JD (S) coalition government in the state.

Both BJP and the Congress-JD(S) alliance have traded allegations of poaching against each other, with the BJP camping all 104 of its elected lawmakers from the state in a Gurugram hotel.

The BJP also used the situation to put pressure on the incumbent government, saying that the withdrawal of support by the two MLAs indicates unrest within their ranks and a possible premature end to their term.

However, Congress and JD(S) leaders have expressed calm, saying that the situation does not affect them in any way and that their government is well under control.