The governor’s administration in a major move had earlier approved creation of a separate administrative and revenue division for the Ladakh region. 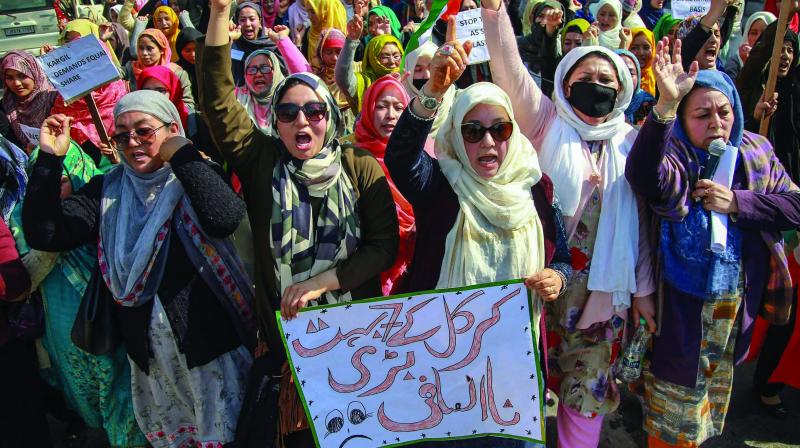 A file photo of residents of Kargil district raising slogans during a protest against Leh being made the permanent headquarters of the newly-created Ladakh revenue division.

Srinagar: The people of Kargil who have stood by the country in difficult times including the 1999 Kargil war have won a battle for their own rights.

After days of protests, during which thousands of people including women braved sub-zero temperatures and marched along the streets of the town against placing Kargil under a newly-created administrative and revenue division for the Ladakh region of Jammu and Kashmir, the residents have managed to convince the state’s administration to open a joint headquarter in Kargil along with the one in Leh.

On Friday, governor Satya Pal Malik, after meeting a delegation of Kargil coordination committee which was at the forefront of the week-long protests, announced that the newly-created administrative and revenue division of Ladakh will have its headquarters jointly at Leh and Kargil.

Earlier, Kargil residents launched a series of strikes, protests and dharnas against the government’s decision of having the revenue division’s headquarters at Leh.

“The people of Kargil feel betrayed. They always threw in their lot with rest of the country, braved bullets and bombs during active hostilities with Pakistan and even in so-called peace times, risking their lives for India. But they are being denied justice and what is long overdue to them,” asserted former lawmaker Haji Asgar Ali Karbalia.

The governor’s administration in a major move had earlier approved creation of a separate administrative and revenue division for the Ladakh region. The move triggered a celebration in Leh, the largest town in Ladakh but caused gloom in Kargil, the other major town of the landlocked region.

The leaders and representatives of various political, social, religious and trade organisations of the predominately Shia Kargil quickly met and decided to launch an agitation against the government’s “discriminatory” move. They said they are not opposed to the creation of a separate administrative and revenue division of Ladakh as such but are disconcerted mainly over the government’s announcement that the newly created posts of divisional commissioner and inspector general of police for Ladakh will permanently remain based in Leh.

Until recently, the Ladakh region was a part of the Kashmir division. Jammu, the third region of the state, has a separate administrative and revenue division headquartered in winter capital Jammu.

The people of Kargil demanded that both Leh and Kargil be made the headquarters of the newly carved out division for six months on rotational basis. A coordination committee of various parties and groups in Kargil which is spearheading the agitation  said that all the democratically elected members of various official bodies, including the Ladakh Autonomous Hill Development Council (LAHDC), Kargil, will resign en-mass if this demand is not conceded forthwith.

A spokesman of the coordination committee clarified that the demand of the people of Kargil is not laced with any communal overtones. “We’re against making Leh the permanent headquarters of the newly created division for logistic reasons. The distance between Leh and Kargil is greater than that between Srinagar and Kargil,” he said. He pointed out that Kargil district also comprised the Zanskar area which is predominantly Buddhist.

Ladakh covers about 1,17,000 square kilometres out of which about 30,000 sq. km are under Pakistan’s direct control. It contains the Ladakh Range which is a south-eastern extension of the Karakoram Range and the upper Indus river valley. It is one of the most sparsely populated regions in J&K and, as per the 2011 census, the total population of Ladakh was 2.74 lakh.

Already the powers of local governance had been decentralised by formation of separate Hill Development Councils for Ladakh’s two districts-Leh and Kargil.

According to the government, there had been persistent demands from the region for creation of a separate division claiming that the tough and distinct topographic conditions.

Former chief ministers Mehbooba Mufti and Omar Abdullah had not only supported the demand of keeping newly announced Ladakh division headquarters on rotational basis between Leh and Kargil but also asked for creation of separate  revenue divisions for the state’s two Muslim majority regions of Chenab valley and Pir Panjal, currently part of Jammu division.

The NC leader added, “It seems the decision on creation of the new revenue division headquartered in Leh was taken in haste and  was contrived to pitch one community against the other.”