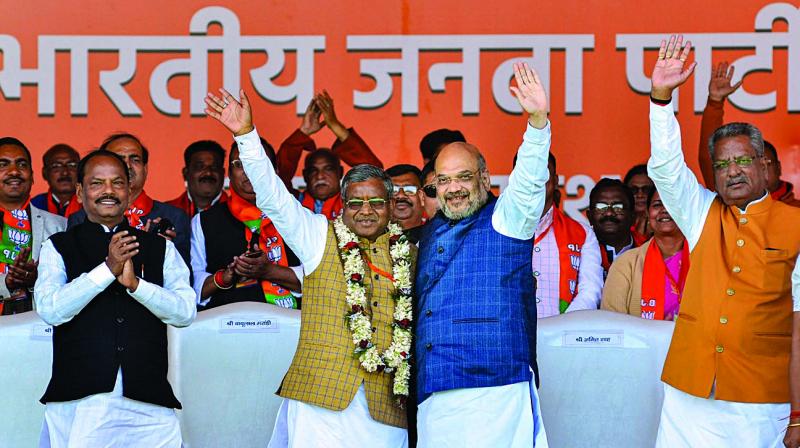 New Delhi/Ranchi: The Jharkhand Vikas Morcha founded by Babulal Marandi headed for a straight split on Monday with the former chief minister announcing the merger of the party with the BJP, shortly after which the two other JVM MLAs surfaced at the AICC Headquarters in Delhi saying they were joining the Congress.

The two MLAs Pradeep Yadav and Bandhu Tirkey claimed that at a meeting on Sunday an overwhelming 95 per cent of the workers of the JVM had decided to join the Congress.

Mr Tirkey said that the party has passed a resolution to this effect and Congress president Sonia Gandhi has accepted that.

The Congress said that since the two out of three existing JVM legislators had joined the party, anti-defection law does not apply as two-thirds of the floor strength of the party was with them. Mr Yadav is also the party’s floor leader in the Jharkhand Assembly.

Questioned as to whether the ruling alliance would seek the disqualification of Mr Marandi then, Congress general secretary in-charge of Jharkhand R.P. N. Singh said that it was an issue on which the Speaker of the Assembly has to take a call.

“Very soon we would be organising a rally which former Congress president Rahul Gandhi would address and we will make other senior state leader of the JVM join us,” Mr Singh told the media here.

Incidentally, both Mr Tirkey and Mr Yadav were  suspended from the party by Mr Marandi last month.

Meanwhile in Ranchi, the former chief minister announced the merger of the JVM with the Bharatiya Janata Party at an event in the presence of home minister Amit Shah and BJP chief J P Nadda.

Mr Marandi had become the first Jharkhand chief minister in 2000 and also the first BJP CM. He formed the JVM in 2006 after splitting with BJP.

Welcoming Mr Marandi in BJP, the home minister said: “I have been trying to bring Babulal Marandi into BJP since I was made BJP chief in 2014. Someone rightly said that he is quite stubborn. We couldn’t persuade him easily. He has now joined BJP as per the wish of the people of Jharkhand.”

Before that, Mr Marandi also said that the BJP has been trying since 2014 to bring him back into the party fold.

In the Jharkhand Assembly polls held in December last year, the pre-poll alliance between Congress, JMM and Rashtriya Janata Dal won majority with a total of 47 seats between them. Out of the three, JMM won 30 seats, Congress won 16 seats and RJD won one seat. With the addition of the two JVM MLAs the strength of the ruling alliance would go up to 49.