At around 11.55 am the chief minister reached the Raj Bhavan and met Mr Dhankhar. 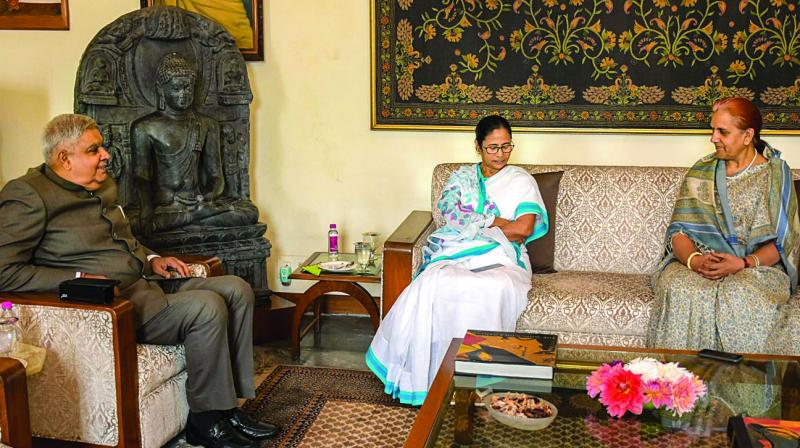 Kolkata: In what may herald a new chapter in the relations between the Mamata Banerjee government and West Bengal governor, the Trinamul Congress supremo on Monday called on Jagdeep Dhankhar at the Raj Bhawan amidst tussle between the two sides on various issues.

This was the first meeting between them since July last year when Mr Dhankhar became the Governor. At around 11.55 am the chief minister reached the Raj Bhavan and met Mr Dhankhar.

She left after an hour. Later Mr Dhankhar tweeted, “Had an extremely satisfying an hourlong interaction with chief minister Mamata Banerjee at Raj Bhawan,” while sharing the photos of their meeting. The governor had been eager to meet the CM one-on-one since December. But the state government cited Ms Banerjee’s preoccupation.

The Raj Bhavan stated, “Chief minister Mamata Banerjee called on the West Bengal governor Jagdeep Dhankhar at Raj Bhawan, Kolkata today. The meeting lasted for an hour and there was interaction as regards varied issues of governance. First Lady Sudesh Dhankhar also greeted the  chief minister when she arrived. The meeting was between the chief minister Mamata Banerjee and governor Jagdeep Dhankhar. No officials were present as this was one to one meeting.”

Ms Banerjee's visit to Mr Dhankhar came close on the heels of the governor’s show cause notice to Prof Debkumar Mukhopadhyay, vice-chancellor of Coochbehar Panchanan Barma University for allegedly not inviting the chancellor to the convocation recently. The governor’s strong step on the V-C has put the state government in a tight spot.

Sources indicated that the CM had discussions on two bills — The West Bengal (Prevention of Lynching) Bill, 2019 and The West Bengal State Commission for Scheduled Castes Bill, 2019 — with Mr Dhankhar as they  are yet to get Governor’s approval.