India   All India  18 Apr 2017  Merger discussions: All you need to know about AIADMK’s tussle
India, All India

Merger discussions: All you need to know about AIADMK’s tussle

This comes after state Finance Minister D. Jayakumar on Monday hinted at the possibility of a merger between the two groups. 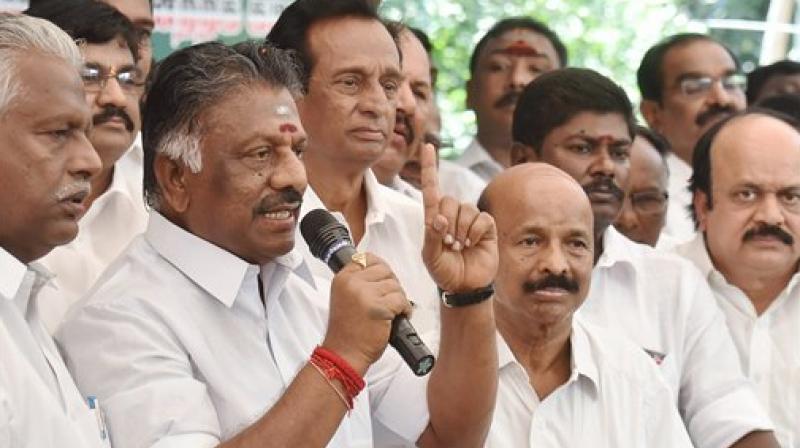 Chennai: Rebel All India Anna Dravida Munnetra Kazhagam (AIADMK) leader O Panneerselvam on Tuesday said the Sasikala faction of the party has formed a committee to conduct talks on merger of the two factions.

NDTV reported that Chief Minister E Palanisamy would be leading a 10-member team to meet Panneerselvam and hold talks.

This comes after state Finance Minister D. Jayakumar on Monday hinted at the possibility of a merger between the two groups.

Jayakumar said all 123 AIADMK lawmakers and party cadres were on the same page and discussed the possibilities of retaining the 'Two Leaves' symbol, which had been frozen by the Election Commission.

On Monday, Panneerselvam, a former Chief Minister of the state, had expressed confidence that the Dhinakaran faction leaders would approach him for merger talks.

"If approached, we are ready to sit and talk and I have confidence that they (leaders) will come (for talks)," he told reporters at the airport here.

"Given the opinion (voiced by OPS), modalities to strengthen the party and to run it with unity were discussed," Jayakumar told reporters, briefing them about the meeting which was attended by most of the ministers of E K Palanisamy government.

According to party sources, MLAs from both factions were holding informal meetings over the issue. An MLA from Sasikala camp, who was on board the INS Chennai, said there are likely to be formal meetings on the matter during the later part of the day.

On Panneerselvam's demand for ending family rule by Sasikala of AIADMK (Amma) and Deputy General Secretary TTV Dhinakaran, her nephew, the MLA said senior leaders would have to decide on any such issue.

However, Finance Minister Jayakumar said there was no such development regarding demands for removal of Sasikala and Dhinakaran from the party posts.

Speculation is rife about a possible pact between Palanisamy and Panneerselvam under which both VK Sasikala, the jailed AIADMK general secretary, and Dhinakaran, her nephew and deputy, would be ousted.

Unconfirmed reports had it that under the arrangement Palanisamy would continue as Chief Minister while Panneerselvam would occupy the coveted post of AIADMK general secretary, which was held by J Jayalalithaa till her death last December. However, Panneerselvam had earlier in the day told journalists nobody had approached him with such a proposal so far.

Asked about speculation in political circles that Sasikala, who is serving a prison term in connection with a disproportionate assets case in which Jayalalithaa was also an accused, was preparing to quit as general secretary, Jayakumar said, "There is no such thing."

The election symbol is seen as part of Jayalalithaa's enduring legacy. The Election Commission had frozen the two-leaves symbol after both Panneerselvam and Sasikala-Dhinakaran factions staked claim to it ahead of the now countermanded April 12 byelection to RK Nagar assembly constituency.

Jayakumar also said the submission of affidavits of district-level party workers to the Election Commission in the symbol dispute was discussed at the meeting. On the possibility of meeting Panneerselvam to take forward the merger proposal, he said "For everything there is a time."

When a reporter pointed out that Panneerselvam had been demanding a probe into the circumstances surrounding the death of Jayalalithaa, and if it was to be made a condition for merger, he shot back, asking "Did he (Panneerselvam) spell out this as a condition?"

Another senior Minister and a heavy weight of the party in the western region, S P Velumani said "For sure we will be united, and retrieve the ‘Two Leaves’ symbol."

"Those who exited (Panneerselvam and his followers) are also part of our family. It is like a fight between two brothers. Together we will get back the ‘Two Leaves’ symbol," he said.

There was reportedly unease in Tamil Nadu's ruling party ever since Income Tax officials raided Health Minister Vijayabaskar's premises and seized evidence of bribing voters for the bypoll to R K Nagar assembly seat. The poll, scheduled for April 12, was countermanded by the Election Commission on April 9 amid allegations of rampant inducement and bribing of voters.

Dhinakaran was the candidate of AIADMK (Amma) faction for the seat. He was earlier in the day booked by the Delhi police after it arrested an alleged middleman who, according to police, was purportedly helping the AIADMK leader reach out to an unidentified official in the Election Commission in return for an astounding Rs 50 crore.

No arrest warrant has been issued against Dhinakaran. But police have in their custody Sukesh Chandrasekhar, the alleged middleman who was picked from a 5-star hotel in New Delhi yesterday, a senior police official said.

Sasikala had reinducted Dhinakaran, who was expelled from the AIADMK by Jayalalithaa, and appointed him the party's deputy general secretary just before proceeding to Bengaluru to serve the remnant of her jail term after the Supreme Court upheld her conviction and sentence in February this year.