Internet services remained suspended for the second consecutive day on Tuesday to discourage people from uploading videos of violence. 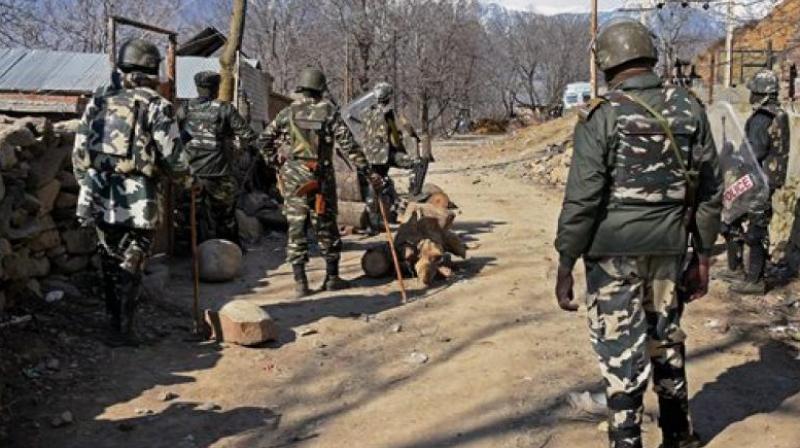 CRPF jawans stand as guards as they keep vigil on protesters in South Kashmir. (Photo: File/AP)

Srinagar: The Jammu and Kashmir government on Tuesday expressed “deep anguish” over the “loss of precious lives” in security forces’ actions across Kashmir and made an appeal to all shades of political opinion to help towards restoration of peace and normalcy in the restive Valley.

A statement issued at the end of the meeting said that it urged the civil society and parents to “counsel the youth to stay away from violent protests which, in spite of maximum restraint, can at times lead to fatal consequences”.

The statement added, “The Cabinet also directed the State administration to take all required measures to tackle the situation effectively and at the same time ensure that the general public is not put to any inconvenience and their grievances are addressed”.

On Monday evening, the Chief Minister had met with Governor NN Vohra at Raj Bhavan in winter capital Jammu to discuss the situation and other law and order-related issues and the recently held by-poll to the Srinagar seat of Lok Sabha and postponement of the same in Anantnag constituency in view of widespread violence witnessed during the voting in Srinagar on April 9.

The deaths and other incidents particularly the police and other security forces’ allegedly resorting to use of “brute” force against student protesters in southern Pulwama town on Saturday and also across the Valley on Monday spread disappointment, resentment and anger among the people in Kashmir. Tension is high and the PDP-BJP government is being widely criticised.

Though no major incident took place on Tuesday when higher secondary schools, colleges and universities remained closed in the Valley, the student unrest has spread to Banihal area just across the Pirpanjal range. Hundreds of students on Tuesday held protest demonstrations in the highway town of Banihal and blocked vehicular traffic on vital Srinagar-Jammu to lode their protest against security forces’ actions against students of the Valley. The police fired teargas canisters and swung bamboo sticks to disperse the crowds, leaving several protesters injured.

In Srinagar, the youth wing of opposition National Conference staged an anti-government demonstration against recent killings and use of “brute’ forces against protesting students. The participants wearing black suits as a mark of protest marched along the City’s Residency Road and then held a protest demonstration in Mushtaq Press Enclave.

The authorities have announced that the Valley's colleges, universities and some higher secondary schools will remain closed for students also on Wednesday. However, the Kashmir University at Srinagar has said that while the class work will remain suspended, all examinations will be held as per schedule.

3G and 4G mobile Internet services remained suspended for the second consecutive day on Tuesday apparently to discourage people from uploading video on the recent incidents on social media sites.