Tripura CM said, 'The Europeans and the Americans may claim that it is theirs, but it is actually our technology.' 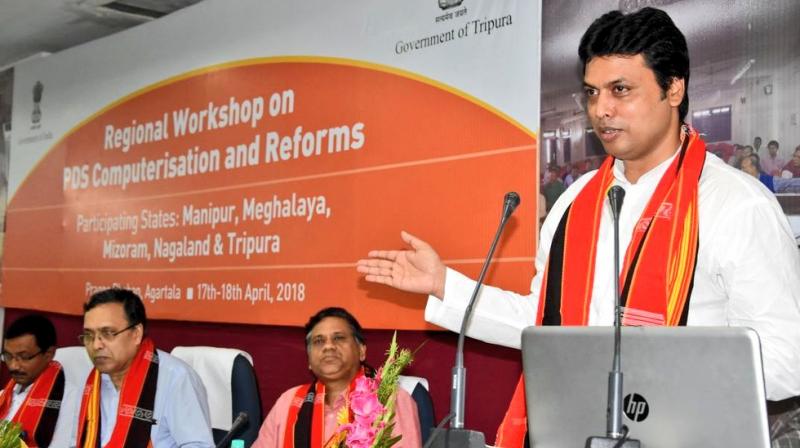 Guwahati: Tripura Chief Minister Biplab Deb on Tuesday came with a new scientific theory about the origin and evolution of internet when he claimed that internet and satellite existed since the Mahabharata era.

"Internet and satellite communication had existed in the days of Mahabharata. How could Sanjaya (the charioteer of King Dhritarashtra) give a detailed account and description to the blind king about the battle of Kurukshetra? It means internet was there, the satellites and that technology was there in this country at that time," Deb said.

Addressing a Regional Workshop on Computerisation and Reforms at Pragna Bhawan in Agartala, the BJP chief minister said, "The Europeans and the Americans may claim that it is theirs, but it is actually our technology."

"Internet and satellite system had existed in India during lakhs of years ago. The richest culture belongs to our nation and I feel proud of it. Even today in internet and software technology, we are ahead. See Microsoft, it may be a US company but most of its engineers are all from our country," he added.

Deb also viewed that since the era of the Mahabharata, India was top in technology but somehow in the middle, it got lost.

"But, again today India has regained its position in technology in the world and it can be proved from the fact that a large number of software engineers play a vital role in the US companies," the chief minister said.

This is not the first time when BJP leaders have made such bizarre statements.

In February, Minister of State for Human Resource Development, Satyapal Singh speaking at a meeting, said that mantras codified the ‘laws of motion’ much before they were framed by Issac Newton.

He also courted a controversy in January when he discredited Charles Darwin’s theory of evolution and said it was “scientifically wrong”.