In the cartoon, Sita is seen commenting to Lord Ram about Kathua and Unnao rape cases. 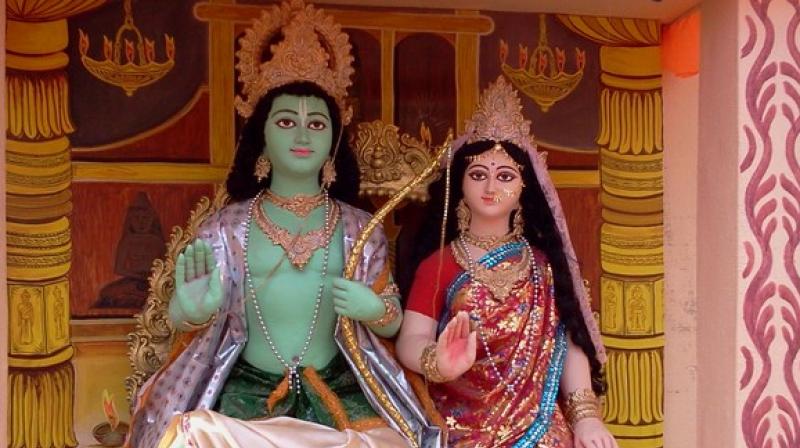 The Ram-Sita cartoon drawn by Hyderabad-based Swathi Vadlamudi, who shared it on social media last week, fetched both praise and abuse. (Representational image)

Hyderabad: A woman journalist in Hyderabad has got into trouble after she used a cartoon depicting Lord Rama and his queen Sita to send across a message on women’s safety.

The cartoon drawn by Hyderabad-based Swathi Vadlamudi, who shared it on social media last week, fetched both praise and abuse. However, things got worse when the woman journalist started receiving death threats with a Charlie Hebdo-style attack.

Few days back, a case was registered against Vadlamudi by a Hindu Sangathan president for hurting Hindu religious sentiments.

Another journalist, Ahmed Shabbir, has been named in the complaint for sharing the cartoon.

According to Sattaiah, Circle Inspector, Saidabad police station, "An advocate Karuna Sagar filed a complaint on April 13, 2018 that Journalist Ahmed Shabbir has shared a cartoon of Lord Ram and Sita which is hurting Hindu religious sentiments. Subsequently, a case was registered under section 295-A of the Indian Penal Code."

Sattaiah added that Sagar again approached the police on April 15 and filed one more complaint.

"On April 15, again the complainant Karuna Sagar approached us and filed one more complaint stating the cartoon was actually created by another journalist Swathi Vadlamudi, who first shared the cartoon on social media. The complainant requested to include Swathi's name in the FIR, which was registered on April 13. So, Swathi Vadlamudi's name was included in the FIR. Further enquiry is on and action will be initiated after the enquiry," Sattaiah said.