India   All India  18 May 2017  How can 'sinful' triple talaq be a matter of faith: SC to Muslim bodies
India, All India

How can 'sinful' triple talaq be a matter of faith: SC to Muslim bodies

SC reserved its verdict on a clutch of pleas challenging the constitutional validity of triple talaq among Muslims. 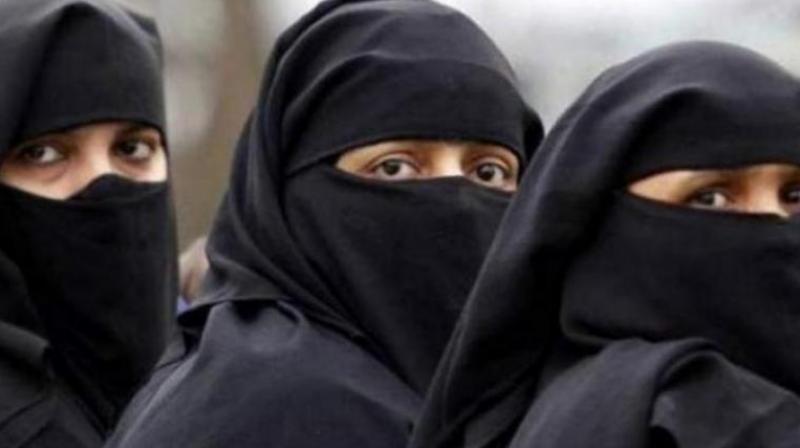 New Delhi: The Supreme Court Thursday asked Muslim bodies how can a practice like triple talaq be a matter of "faith" when they have been asserting that it is "patriarchal", "bad in theology" and "sinful".

The court took note of repeated submissions of the AIMPLB and former Union minister and senior lawyer Salman Khurshid, who is assisting it in personal capacity, that triple talaq is not mentioned in holy Quran and is rather "sinful", "irregular", "patriarchal", "bad in theology" and "undesirable", but the court should not examine it.

"You (Khurshid) say it is sinful. How can a sinful practice be said to be a matter of faith... Has it (triple talaq) going on in consistently for 1,400 years? The answer is 'yes'.

"Has it going on in the world? The answer is 'no'. The system itself say it is horrendous and bad," the bench, also comprising justices Kurian Joseph, R F Nariman, U U Lalit and Abdul Nazeer, said.

The observations were made when Khurshid was advancing rejoinder arguments by emphasising that the practice was sinful and bad in theology which cannot be good in law. He, however, argued that the court should not examine it.

Senior advocate Amit Singh Chadha, appearing for Shayara Bano, one of the victims of triple talaq, started rebuttal arguments quoting AIMPLB's stand that this is sinful and patriarchal practice and said this cannot be integral to Islam.

The patriarchal practice of triple talaq in a male-dominated community is not recognised by many schools of thought, he said, adding, "It is a bad, undesirable and sinful practice and violates constitutional guarantees of Muslim women."

Asking the court not to resort to "hands off" policy, Chadha said judiciary was the only hope for people, opposed to it as Muslim bodies say it is bad, but be allowed to continue and the Centre says that it is undesirable, but it would not legislate.

Chadha also argued it has been admitted by all parties that Islam does not discriminate between men and women and it maintains marriage as far as possible.

"Triple talaq is outlawed in various Muslim countries, predominantly in Hanafi countries like Pakistan and Afghanistan. The moment it is said to be bad in theology that is religious belief, the protection of Article 25 (right to practice religion) is thrown out," he said adding this Article protects only good thing of theology.

Chadha also argued that state shall not deny the rights guaranteed under Articles 14 (right to equality) and 15 (gender equality) of the Constitution and a time has come to test this centuries-old practice, invalid in the eyes of law.

"Triple talaq is not a part of religion and it cannot be said that is a part of the practice," he said.

He also argued that even the government has said that it was not something which was fundamental to Islam.

He strongly objected to the suggestion made by AIMPLB that it may ask 'qazis' to include a condition in 'nikahnama' (marriage contract) giving a right to women to say either 'no' or 'yes' to triple talaq.

He said that it would be illegal as the Dissolution of Muslim Marriage Act 1939 provides that a woman will have to go to a court to get divorce.

"A married Muslim woman, if she want divorce, will have to go to a court of law. This will not serve the purpose as a Muslim man can give divorce instantaneously," he said.

Senior lawyer Anand Grover, appearing for an organisation opposing triple talaq, said that as of today, most Sunni Muslim women were against this practice and the AIMPLB was not giving a correct perception to the apex court.

Former Union minister, Islamic scholar and lawyer, Arif Mohammad Khan, arguing for All India Women Personal Law Board, strongly objected to the submissions of the AIMPLB and said Islam cannot have any room to dictate any person and the holy Quran says "killing an innocent person is like killing the entire humanity".

"Three pronouncement of talaq in one go is not valid and is a practice from pre-Islamic Arab era and is not integral to Islam," he said.

Khan, who had quit the Rajiv Gandhi cabinet over differences in handling the Shah Bano case, said the whole Shariat law has been distorted as "Shariat is the holy Quran and not the opinion of these people (clerics). The holy Quran considers the importance of family and it provides four steps before pronouncement of divorce."

Another former Union minister and senior advocate, Kapil Sibal, who appeared for AIMPLB, said that Attorney General Mukul Rohtagi had raised the issue of constitutional morality in the matter.

"If they (government) want to have a law, have it. They cannot say we will not have a law and you (court) decide it. It is for the government to frame a law and then it can be tested on the principles of morality," he said.

Sibal said this was a "very complex situation" as the AIMPLB says it was a practice and Article 25, which guarantees freedom of conscience and free profession, practice and propagation of religion, is a fundamental right.

"How will you (court) set it aside? The government can bring a law as measure of social reform. If the law does not permit anybody to do something, it can be tested," he said.

"Lots of thing are happening in the society which are protected by customs. The court is not here to decide what is a sinful practice in the world. We are talking about rule of law," he said.

Sibal further said, "We are talking about very serious constitutional issue. There is a process provided under the Constitution. Follow that process."

He said that a court cannot decide the issue in "vacuum" and triple talaq is a practice which has not been disputed and it is practiced by all the schools of thought.

Regarding the court's query on whether a woman can be given an option of saying 'no' to triple talaq at the time of execution of 'nikahnama', Sibal said he had a meeting with AIMPLB members and they have decided to issue an advisory to all the Qazis to put it in nikahnama.

"Put it on record before the court," the bench said.

"Only 0.4 per cent is practising it and this is not a ground to strike it down," Sibal said adding that Qazis have been advised to avoid triple talaq until there were unforeseen circumstances.

He said that the issue stands at a dangerous and slippery slope and "all must be careful about it" and this was not an area where court should enter.

"If there is a consensus among Muslim scholars that it is a practice then it is valid. There is nothing in the Quran which says triple talaq is not valid," he said.

Another senior advocate Indira Jaising, appearing for one of the groups opposing triple talaq, told the bench that there were slippery slopes on both sides and the court will have to walk on the "razor" and decide the issue.

On conclusion of the six-day long marathon hearing, the bench thanked the lawyers for assisting it during summer vacation.

"We thank each and everyone of you for the assistance you have given to us during the vacation," it said.

The bench had made it clear that it would examine whether the practice of triple talaq among Muslims is fundamental to their religion and had also said for the time being it will not deliberate upon the issue of polygamy and 'nikah halala'.

It had also said that the issue of polygamy and 'nikah halala' would be kept pending and will be dealt with later.

The apex court had on its own taken cognisance of the question whether Muslim women faced gender discrimination in the event of divorce or due to other marriages of their husbands.

The Centre had earlier said that triple talaq is neither integral to Islam nor a "majority versus minority" issue but rather an "intra-community tussle" between Muslim men and deprived women.