Salve, who took up the case 'pro bono' (free of charge), said India had 'a lot at stake' in it. 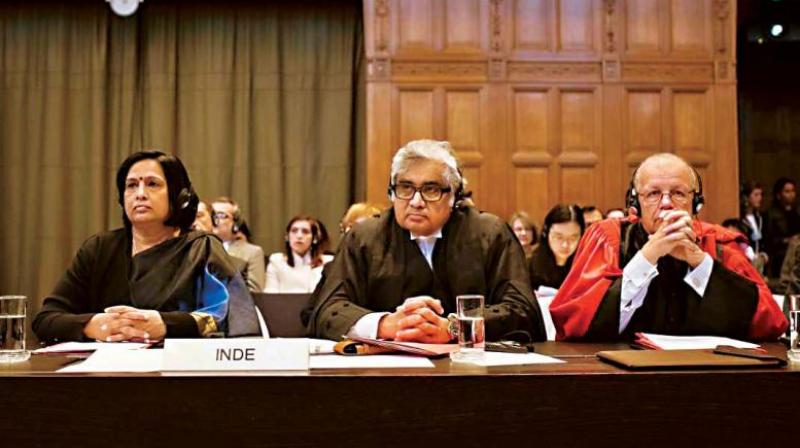 File photo of senior advocate Harish Salve (C) at the International Court of Justice in The Hague. Salve is representing India in the Jadhav case.

New Delhi: India's case on Kulbhushan Jadhav has been 'emboldened' and 'invigorated' with the first round of victory at the International Court of Justice, senior advocate Harish Salve, who represented the country, said today.

Salve, who took up the case 'pro bono' (free of charge), said India had 'a lot at stake' in it and that he felt a 'positive energy and connect with judges' while arguing the matter in which Pakistan did not seem to have the same.

"As a lawyer for 40 years, you get a feel of how judges are reacting. I felt a positive energy when I was arguing the case. I felt the judges were connecting. I felt gratified. I did not feel that connection when the other side was arguing," he told TV news channels from London. Salve said, "It was a complicated subject. We worked hard and prima facie got acceptance on all our points. We are now a lot more emboldened and a lot more invigorated."

He said it was a big decision by the government to approach the ICJ as India had a lot at stake. "The government had complete faith in my advice," he said.

He said that the ICJ has rightly held that India should have been granted consular access as per the Vienna Convention to which both the countries have been signatories since 1977.

He said that the order of the ICJ was 'binding' on both the countries. "I think the court thought it appropriate to clarify that this order is binding. That puts everything to rest and also indicates the mind of the court prima facie. To me as a lawyer, it's a degree of satisfaction," he said.

On being asked about charging Re 1 as the fee for fighting the case, Salve said he took the case 'pro bono' as he believed in it. "When you believe in the case you do it pro bono and this was such a case. Government of India sought advice from me at the initial stage after which I researched about the case and gave my advice," he said.