ICJ President Ronny Abraham, who headed the bench, also ruled that India should be given consular access to Kulbhushan Jadhav. 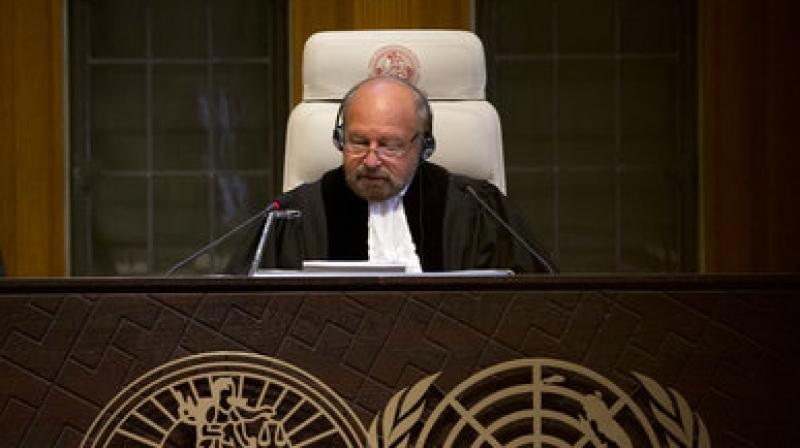 Presiding judge Ronny Abraham of France, centre, reads the World Court's verdict in the case brought by India against Pakistan in The Hague, Netherlands, Thursday, May 18, 2017. (Photo: AP)

The Hague: In a big diplomatic win for India, the International Court of Justice (ICJ) at The Hague Thursday stayed the execution of former Indian naval officer Kulbhushan Jadhav by Pakistan till it takes a final decision on the matter.

India has appealed to the world court that Pakistan did not heed an international treaty that granted diplomatic immunity to foreign nationals charged with capital crimes.

“Pakistan shall take all measures at its disposal to ensure Jadhav is not executed pending final decision,” Judge Ronny Abraham, President of the Court, ruled.

A Pakistan military court had awarded the death sentence to Jadhav, who was arrested on March 3 last year, last month for espionage and subversive activities.

India had dragged Pakistan to the ICJ on May 8 for refusing consular access to Jadhav and for violating the Vienna Convention on consular relations.

The ICJ asserted its jurisdiction over the case of Jadhav. The circumstances of Jadhav's arrest remain disputed, Judge Abraham said while reading out the world court’s verdict.

It also said that the 150-day period for clemency given by Pakistan, which ends in August, suggests that the execution can happen immediately thereafter.

The top UN court also said that Pakistan should have given consular access to India as per Vienna Convention. “It appears that the rights invoked by India under Article 36 of the Vienna Convention in the present case are plausible,” Judge Abraham said.

The 11-judge bench of the UN's highest court presented its verdict two days after India and Pakistan gave their submissions on the 46-year-old former Indian naval officer.

The only condition under which Jadhav now stands to face execution is if Pakistan does not comply with the ICJ's decision. India can then go to the Security Council, which may then decide upon measures to be taken to give effect to the judgement.

The UN charter entails that 'each member of the United Nations undertakes to comply with the decision of the International Court of Justice' and 'if any party to a case fails to perform the obligations, the other party may have recourse to the Security Council.'

“I assure the nation that under the leadership of Prime Minister Modi, we will leave no stone unturned to save Kulbhushan Jadhav,” Swaraj tweeted.

“I complement my team of officers in the MEA for their tireless efforts and hard work,” she wrote on Twitter.

Hailing the verdict, Attorney General Mukul Rohatgi said it is a victory for India's stand. He added that the ICJ verdict had shown that the military court trial by Pakistan was a 'charade', and that the neighbour had been completely 'blown away' by it.

Rohatgi said that he hoped that the final verdict, which would be announced in August, would also be in India's favour.

Responding to a question, Rohatgi asserted that the ICJ's interim verdict on Thursday was binding on both India and Pakistan.

During its submission to the ICJ on May 15, India had demanded the immediate annulment of Jadhav's death sentence, expressing fears that Pakistan could execute him even before the hearing at the ICJ was over.

While India asserted that Jadhav was kidnapped from Iran where he was involved in business activities after retiring from the Indian Navy, Pakistan had claimed to have arrested Jadhav from its restive Balochistan province.

On its part, Pakistan had told the ICJ that Vienna Convention provisions on consular access were not intended for a "spy" involved in terror activities and charged India with using the world body as a stage for "political theatre" in the Jadhav case.

It is after 18 years that the two neighbours were fighting it out at the ICJ. Last time, Pakistan had moved the ICJ seeking its intervention over the shooting down of its naval aircraft.