Sources further said, “Our relationship with Russia is a very old, trusted and deep-rooted one. 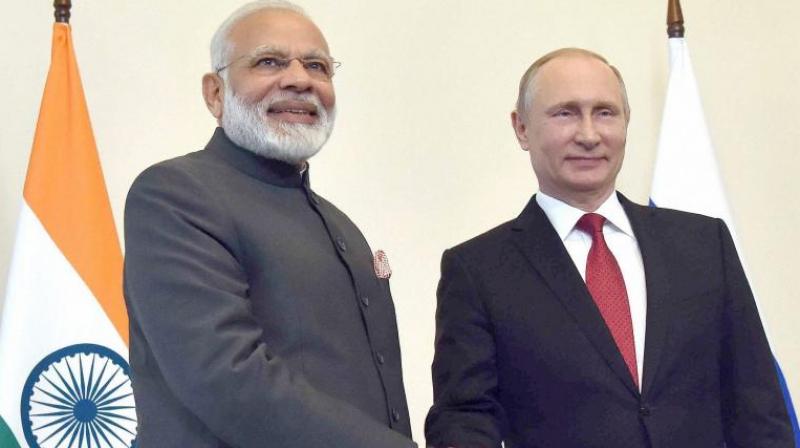 New Delhi: In the light of concerns that any American sanctions on Russian military exports could affect the supply of badly-needed Russian military equipment to India, sources have said New Delhi is “not going to allow our defence requirements to be dictated by any other country”.

India is, however, lobbying with the Trump administration and the US Congress on the matter to convince them of the importance of crucial Russian military equipment that India proposes to acquire. The issue assumes significance ahead of the crucial informal Summit that Prime Minister Narendra Modi and Russian President Vladimir Putin will hold in the Russian Black Sea town of Sochi on May 21. New Delhi is also apparently closely watching the growing Moscow-Islamabad friendship and has been expressing its concerns to Russia on the matter.

Sources indicated that there could be more such informal summits in the future with various other world leaders since PM Modi “feels that this is one of the essential ways in which diplomacy operates in the current age”. Regional and International issues as well as the broad aspects of bilateral ties are expected to be discussed between Mr Modi and Mr Putin during the informal summit in which the agenda has been kept “flexible”. Specific bilateral issues will not be discussed at the informal Summit and there will be no formal agreement or document at the end of the parleys.

The informal Summit comes at a time when ties between the Russia and the West have sharply deteriorated.Observers feel that the informal Summit could be a shrewd move to strengthen Indo-Russian ties that are perceived to have come under strain in the past few years due to New Delhi’s growing proximity to Washington. The informal Summit also comes after a similar Summit recently between PM Modi and Chinese President Xi Jinping in the Chinese city of Wuhan that had given a new momentum to Sino-Indian ties.

Sources on Thursday said, “As far as we (India) are concerned, we are not going to allow our defence requirements to be dictated by any other country. Whatever is in India’s interests in terms of procuring equipment for national security and defence is what will determine the manner in which we act with various countries. On the matter of (the US) CAATSA (Countering America’s Adversaries through Sanctions Act), we have been lobbying with both the US Administration and the (Capitol) Hill (US Congress) explaining to them that there are certain requirements that we have and we will continue with this.

Russia has been a reliable and trusted defence partner.” Incidentally, India is reportedly interested in acquiring the lethal S-400 missile systems from Russia. On the importance of such informal summits, sources said, “I think we could expect such informal summits in the future as well because the Prime Minister feels that this is one of the essential ways in which diplomacy operates in the current age. This pracice is likely to continue in the future.”

On India’s concerns about growing Russia-Pak ties, sources said, “As far as the relations with Pakistan are concerned, we have from time to time raised concerns. They (the Russians) have from time to time assured us that the Government of Russia will not undertake any such activities which impinge on national security. We accept these assurances for what they are, the assurances of a trusted friend and a trusted partner.”

Sources further said, “Our relationship with Russia is a very old, trusted and deep-rooted one. We understand that this is specially so in the area of national security and defence. The relationship is big enough, broad enough and strategic enough that we can handle differences of view.”

Earlier this week, the Ministry of External Affairs had said, “At the invitation of Mr. Vladimir Putin, President of the Russian Federation, Prime Minister Narendra Modi will visit Russia on 21 May 2018 for an informal Summit with President Putin in the city of Sochi. This will be an important occasion for the two leaders to exchange views on international matters in a broad and long-term perspective with the objective of further strengthening our Special and Privileged Strategic Partnership. Both leaders will also discuss their respective national developmental priorities and bilateral matters. This informal Summit in Sochi between Prime Minister Modi and President Putin is in keeping with the tradition of regular consultations between India and Russia at the highest levels.”

Sources said the two leaders would “try and understand” what the other feels about the happenings in the rest of the world, adding that the objective of the Summit was not to sort out any problem.