India   All India  18 May 2021  Bleeding and blood clotting identified due to Covishield
India, All India

Bleeding and blood clotting identified due to Covishield

Since the Covid-19 vaccination drive was initiated, more than 23,000 adverse events have been reported through the CoWin platform 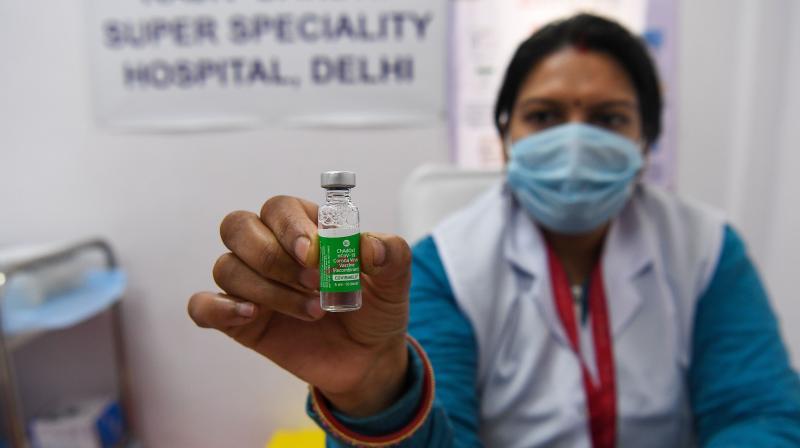 The National AEFI Committee has said that bleeding and clotting cases following the vaccine shots in India were minuscule and in line with the expected number of diagnoses of these conditions in the country.— AFP

New Delhi: The number of daily fresh Covid-19 cases on Monday was below the 3 lakh-mark for the first time since April 21 in the country. Delhi too, for the first time since April 5, recorded 4, 524 fresh cases and the city’s case positivity rate dropped to 8.42 per cent. However, However, since testing is usually low on Sundays, the figures in the next couple of days will be important to watch.

The Centre of Monday said it has identified only 26 potential cases of bleeding and blood clotting in India due to the administration of the Covishield vaccine as Adverse Event Following Immunization (AEFI).

In a report submitted to the ministry of health and family welfare, the National AEFI Committee has said that bleeding and clotting cases following the vaccine shots in India were minuscule and in line with the expected number of diagnoses of these conditions in the country,

The report comes after alerts were raised in some countries on post-vaccination “embolic and thrombotic events” on March 11, 2021, particularly with the AstraZeneca-Oxford vaccine, Covishield, in India.

Since the Covid-19 vaccination drive was initiated, more than 23,000 adverse events have been reported through the CoWin platform from 684 districts of the country. Of these, 700 cases (@ 9.3 cases/million doses administered) were reported to be serious and severe, the health ministry said.

“The AEFI Committee has completed an in-depth case review of 498 serious and severe events, of which 26 cases have been reported to be potential thromboembolic (formation of a clot in a blood vessel that might also break loose and carried by the blood stream to plug another vessel) events following the administration of Covishield vaccine – with a reporting rate of 0.61 cases/ million doses,” the report said. It added there were no potential thromboembolic event following administration of Covaxin vaccine.

“AEFI data in India showed that there is a very miniscule but definitive risk of thromboembolic events. The reporting rate of these events in India is around 0.61/million doses, which is much lower than the 4 cases/million reported by UK’s regulator Medical and Health Regulatory Authority (MHRA). Germany has reported 10 events per million doses,” the report said.

The health ministry is separately issuing advisories to healthcare workers and vaccine beneficiaries to encourage people to be aware of suspected thromboembolic symptoms occurring within 20 days after receiving any Covid-19 vaccine (particularly Covishield) and report preferably to the health facility where the vaccine was administered. People have to watch out for breathlessness, pain in the chest, pain in limbs/pain on pressing limbs or swelling in limbs (arm or calf), multiple, pinhead size red spots or bruising of skin in an area beyond the injection site, persistent abdominal pain with or without vomiting, seizures in the absence of previous history of seizures with or without vomiting, severe and persistent headache with or without, weakness/paralysis of limbs or any particular side or part of the body, persistent vomiting without any obvious reason, blurred vision or pain in eyes or having double vision, change in mental status or having confusion or depressed level of consciousness, any other symptom or health condition which is of concern to the recipient or the family.

However, in the absence of a proper reporting mechanism as most of the helplines are not responding, and awareness among people to report to AEFI, the study may not be reflecting the true picture and magnitude of AEFI.

Prime Minister Narendra Modi interacted with a group of doctors to discuss the Covid situation. He said home-based care of patients must be SOP driven and it was imperative to expand telemedicine services in all tehsils and districts of the country besides giving psychological care as well as physical care importance. The PM urged doctors to include oxygen audit in their daily efforts and discussed the challenge of Mucormycosis. He said doctors may need to put in extra effort towards spreading awareness about it.

Meanwhile, the first batch of anti-Covid drug 2DG developed by the Defence Research and Development Organisation (DRDO) was launched on Monday. The medicine will be supplied directly to hospitals from June. The indigenous anti Covid drug is expected to reduce average recovery time by 2.5 days and oxygen demand by 40 per cent. Apollo Hospitals and Dr Reddy's have also announced the vaccination programme with Sputnik V.