India   All India  18 May 2021  Cyclone Tauktae weakens after making landfall on Gujarat coast
India, All India 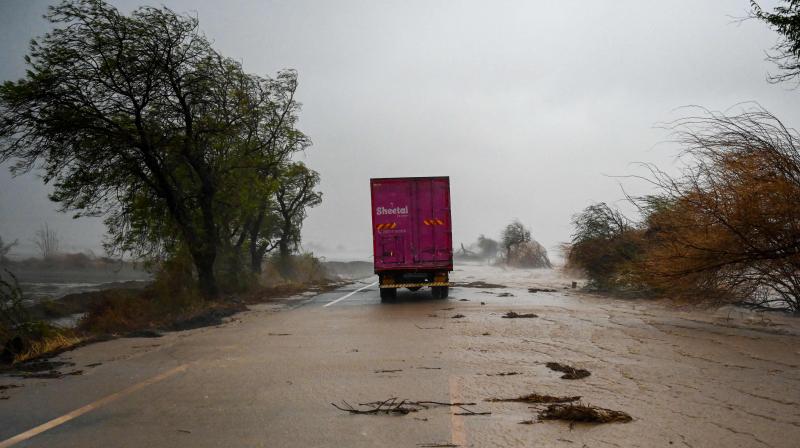 A truck is stranded on a flooded highway near Diu on May 18, 2021, after Cyclone Tauktae blasted ashore in western India late May 17 with fierce winds and drenching rains that turned streets into rivers, disrupting the country's response to its devastating Covid-19 outbreak. (Punit PARANJPE / AFP)

Diu: The landfall process of the eye of extremely severe cyclonic storm Tauktae, which hit the Gujarat coast in Saurashtra region between Diu and Una, ended around midnight, the India Meteorological Department (IMD) said on Tuesday.

State officials said there are no reports of any casualty due to the tropical storm 'Tauktae' (pronounced as Tau'Te), adding it has weakened.

"The entire eye of the cyclone has now crossed the coast and lies over land. The rear sector of the eye is now entering the land," the IMD said in a tweet after midnight.

Landfall is the storm moving over the land after its intensification in the ocean (heat source). A cyclone is said to make landfall when the centre of the storm (eye) moves across the coast.

The landfall brings with it high-speed winds, severe storm surge and torrential downpour. The storm usually weakens rapidly after landfall as the ocean heat and moisture that fuels it are no longer available.

The cyclone hit the coast between Diu and Una around 9 pm on Monday and ended around midnight, the IMD said.

The state government had shifted over two lakh people to safer locations before the cyclone hit the Gujarat coast.

The place above which the eye of a cyclone crosses is designated as the place of landfall, an official said.

The landfall process started with the entry of the "forward sector of the eye of the cyclone" into the land near the Union Territory of Diu with a wind speed of between 150 and 175 km per hour, IMD officials said.

The regional meteorological centre said the cyclone will move towards northern Gujarat.

"It will move towards Amreli district and then towards Banaskantha after crossing Surendranagar district. We expect it will weaken as it moves forward," an official said.

While there are no reports of any human injury or death, gusty winds coupled with heavy rain uprooted several trees and electricity towers on the coastal belt, another official said.

The cyclone winds also caused road blockage and power outages in many villages of these districts.

Gujarat Chief Minister Vijay Rupani had said before the landfall that coastal districts of Amreli, Junagadh, Gir- Somnath and Bhavnagar will face the maximum brunt as the wind speed would go up to 150 kmph when the eye of the storm would make landfall.

A major cyclone in Gujarat on June 9, 1998, had brought widespread death and destruction in its wake, particularly in the port town of Kandla.

While official figures had then put the death toll at 1,173, adding 1,774 went missing, media reports, eyewitness and volunteer accounts suggested that this was grossly an understatement.

A leading news magazine had then claimed that at least 4,000 people had died and countless went missing as bodies were washed to the sea.