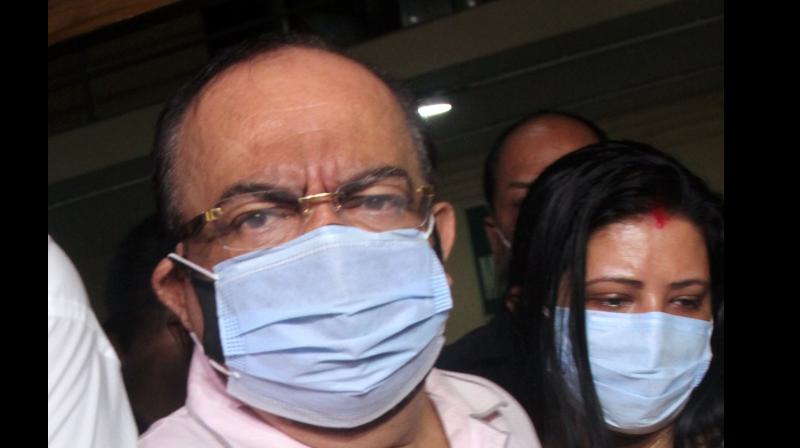 Former TMC leader Sovan Chatterjee comes out of the CBI office, Nizam Palace, in Kolkata, early Tuesday, May 18, 2021. The Calcutta High Court issued a stay order on the bail of the four All India Trinamool Congress leaders who were arrested Monday in the Narada sting case. (PTI)

Kolkata: Trinamool Congress MLA Madan Mitra and former party leader Sovan Chatterjee, who were arrested by the CBI in the Narada sting case, were admitted to a hospital here early on Tuesday after their health condition deteriorated in a correctional home, an official said.

They were taken to the state-run SSKM Hospital as both the politicians complained of breathlessness, he said.

The central agency had also apprehended two senior West Bengal ministers Firhad Hakim and Subrata Mukherjee in connection with the case, and all four were taken to Presidency Correctional Home in Kolkata late on Monday night.

"Chatterjee and Mitra complained of breathlessness at around 3 am, following which they were brought to the hospital. Both have been kept on oxygen support at the Woodburn Ward of the SSKM Hospital. They are stable now," the official of the medical facility told PTI.

Mukherjee, who fell sick in the correctional home, was also brought to the hospital for a check-up early on Tuesday, he said.

But the minister was taken back to the jail after completion of the health check-up as he "did not want to get admitted" to the medical facility, the official said.

Mukherjee was again brought to SSKM Hospital on Tuesday morning for some tests, he said.

The health condition of Hakim, however, was stated to be fine.

Following the admission of the two arrested political leaders at the hospital, a large posse of Kolkata Police personnel has been deployed there.

The four were apprehended on Monday morning.

The Calcutta High Court stayed a special CBI court's decision to grant bail to the four who were arrested and charge-sheeted by the agency in the Narada sting tape case.

A division bench said it deemed it appropriate to stay the special court's order and direct that they shall be treated to be in "judicial custody till further orders".

The sting operation was conducted by Mathew Samuel of Narada News, a web portal, in 2014 wherein some people resembling TMC ministers, MPs and MLAs were seen receiving money from representatives of a fictitious company in lieu of favours.

The tapes were made public just before the 2016 assembly elections in West Bengal.

The Calcutta High Court had ordered a CBI probe into the sting operation in March, 2017.