Delhi CM confirmed that his colleague has been hospitalised even as tug-of-war between AAP and L-G refused to die down on the seventh day. 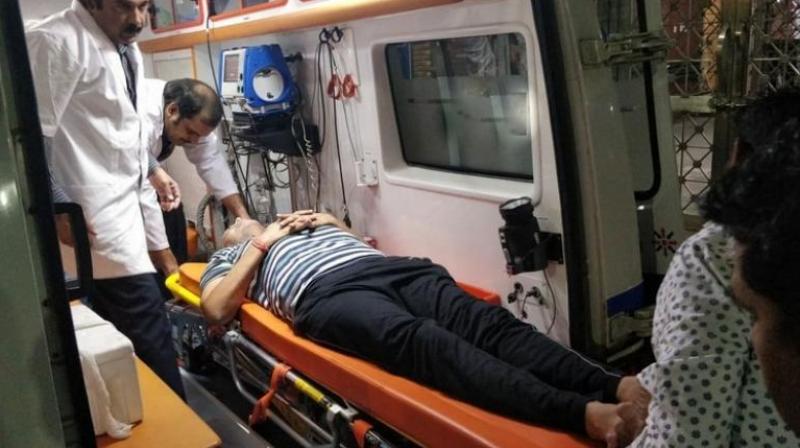 The Health Minister was taken to the LNJP Hospital, officials said. (Photo: PTI)

New Delhi: Delhi Minister Satyendar Jain on Sunday night rushed to a city hospital as his health deteriorated nearly a week after he had gone on an indefinite hunger strike at the Lieutenant Governor office, Chief Minister Arvind Kejriwal said.

The Health Minister was taken to the LNJP Hospital, officials said.

Kejriwal confirmed that his colleague has been hospitalised even as the tug-of-war between the AAP government and the L-G refused to die down on the seventh day on Sunday.

"Satyender Jain shifted to hospital due to his deteriorating health (sic)," he tweeted. His health summary this morning showed that his sugar level was 64 units (mg/dL) and ketone level in urine was "large".

Kejriwal, his deputy Manish Sisodia, Jain and Gopal Rai, have stayed put at the L-G office demanding that Lieutenant Governor Anil Baijal direct IAS officers to end what the AAP described as their "strike" and approve the doorstep ration delivery scheme.

Jain had gone on strike on Tuesday, and his sugar level had further dipped on Saturday, even as he asserted that the AAP government will continue to fight for people of the city.

In a tweet, the minister had shared a copy of his health summary, which said, the ketone level in urine had increased to a "large amount".

"My reports. Ketones are increasing and blood sugar is constantly low. Lost 3. 7 kg wt in 4 days. We will continue fighting for ppl of Delhi (sic)," he had tweeted.

On Saturday, a team of medical specialists had examined Jain and Sisodia, who is also on indefinite fast at the L-G office since Wednesday.

On Saturday, the sugar level had dipped again to 40 units.