Ratna Bhandar is the treasury of the 12th century Sri Mandir, the abode of Lord Jagannath. 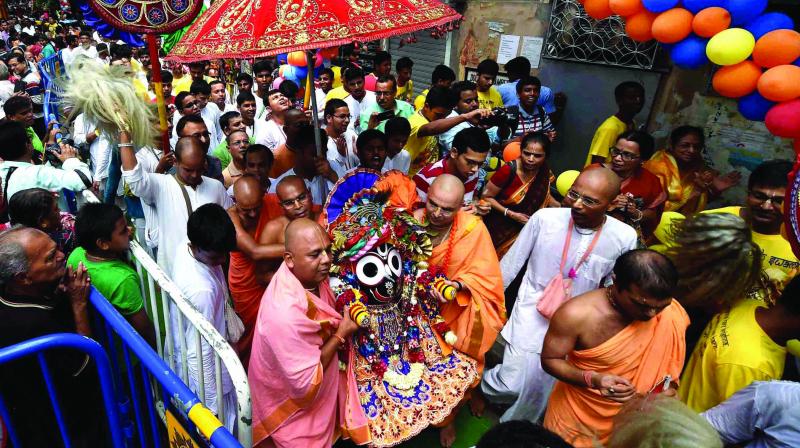 Priests of the 12th century Sri Mandir, the abode of Lord Jagannath, perform a ritual during the annual rath yatra in Puri.

The mysterious disappearance of the key to Lord Jagannath’s Ratna Bhandar   and the sudden emergence of a duplicate key have added spice to politics in the poll-bound state.

Bhubaneswar: The “missing” key of Lord Jagnnat’s Ratna Bhandar from the treasury of Puri district collector and the appearance of a duplicate key have led political parties to lock horns over the issue in view of the forthcoming Assembly elections.

Ratna Bhandar is the treasury of the 12th century Sri Mandir, the abode of Lord Jagannath.

According to the Odisha government, the bhandar has more than 12,000 tolas (each tola is approximately 10 grams) of gold jewellery and precious gemstones, including diamonds, worth over several thousands of crores of rupees.

The incident (missing key) came to light when the government, following an Odisha high court order on April 4, opened the inner chamber of bhandar for evaluation of jewellery and gemstones. It may be noted that the treasury was last opened in 1985.

A 16-member team, led by Pradeep Jena, then chief administrator of Sri Jagannath Temple Administration (SJTA), had to suspend the process midway due to the missing key, a matter which came in public domain earlier this month.

The BJP and the Congress, desperate to form government in Odisha in 2019 Assembly polls, launched protests across the state to fan people’s sentiments against the ruling Biju Janata Dal (BJD). The Opposition parties have demanded the resignation of chief minister Naveen Patnaik and a CBI probe in place of the judicial inquiry ordered by the BJD government.

Odisha law minister Pratap Jena, in an apparent bid to keep the ruling government away from controversy, said the truth will come out after the judicial probe.

“People will come to know the truth once the judicial commission submits its report,” Mr Jena  said.

Reacting to the government statement on June 13 that it has found a duplicate key from the Puri district collector’s record room, BJP spokesperson Pitambar Acharya said that the entire episode smacks of a conspiracy.

“The administration says it has found the duplicate key. If so, then where is the original key? And why was a duplicate key kept in the record room?" he asked.

Odisha Congress president Niranjan Patnaik said the people have started doubting if the gold jewellery and gemstones are safe in the Ratna Bhandar. “The government must clarify on this issue. Otherwise,  people will be sure that there has been foul play,” he added.

The Congress, Mr Patnaik said, would take to streets seeking an impartial probe into the missing key case.

With 2019 Assembly and Lok Sabha elections fast approaching, the BJD government, which had earlier wriggled its way out of controversies such as mining scam and chit fund scam, now finds the missing key incident snowballing into a major controversy, threatening to erode its popularity.