Luo Zhaohui said India and China cannot another Doklam-like standoff and that the two countries need to narrow their differences. 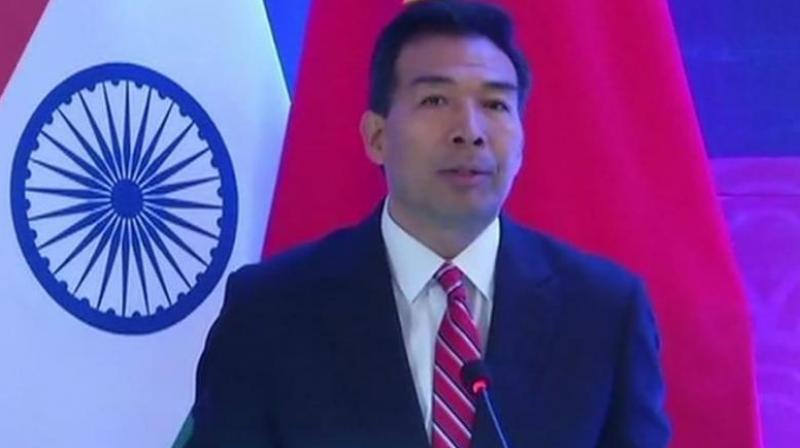 Luo Zhaohui was delivering a keynote address on ‘Beyond Wuhan: How Far and Fast can China-India Relations Go’ at an event organised by the Chinese Embassy in New Delhi. (Photo: ANI)

New Delhi: The Congress has condemned a recent statement by the Chinese envoy to India where he suggested that China, India and Pakistan be in a trilateral summit.

Congress leader Manish Tiwari said: “We hope the government of India will also condemn his statement. Our stand has been that issues between India and Pakistan be solved bilaterally.”

Chinese envoy Luo Zhaohui on Monday said at an event in New Delhi that “some Indian friends” had suggested a trilateral summit comprising India, China and Pakistan would be a “very constructive” idea. Leaders of China, Russia and Mongolia hold a similar meet, he noted.

“This is a proposal suggested by some Indian friends and it is a very a good and constructive idea. Maybe not now, but in the future, that is the great idea.”

Bilateral ties between India and China can’t take the strain of another Doklam episode, the Chinese envoy also said, emphasising on the need to find a “mutually acceptable solution” on the boundary issue through a meeting of the Special Representatives.Dwelling on Sino-Indian ties, he said it is quite natural to have differences but they need to be controlled and managed through cooperation.

“We need to control, manage, narrow differences through expanding cooperation. The boundary question was left over by history. We need to find a mutual acceptable solution through Special Representatives’ Meeting while adopting confidence building measures,” he said.

“We cannot stand another Doklam (sic),” the envoy said.

He was delivering a keynote address on ‘Beyond Wuhan: How Far and Fast can China-India Relations Go’ at an event organised by the Chinese Embassy in New Delhi.

Indian and Chinese troops were involved in a 73-day stand-off at the Doklam tri-junction of India, Bhutan and China between June to Augustin 2017.

One of the immediate fallouts of the Doklam stand-off was the suspension of the Kailash Mansarovar Yatra from Nathu-La side and the annual military exercise between the two countries. China also did not give the hydrological data of the Brahmaputra and the Indus river that originates in Chinese Tibet.

The envoy said on Monday China will continue to promote religious exchanges and make arrangements for Indian pilgrims going to Kailash Mansarovar in Tibet.

Post-Doklam, there have been frequent high-level engagements between the leaders of the two countries.

Luo said the two leaders are also likely to meet on the sidelines of the BRICS Summit and G20 Summit later in 2018.

He noted that security cooperation is one of the three pillars of the Shanghai Cooperation Organisation, an eight-member grouping also comprising India, China and Pakistan.

The envoy added that relations between India and China have gone beyond the bilateral scope.

“We need to enhance coordination and cooperation in SCO, BRICS and join hands to tackle social challenges,” he said.

Responding to a question on India-China cooperation in Afghanistan, Luo said the two countries have identified a programme to train Afghan public servants and diplomats.

In the informal summit between Modi and Xi at the Wuhan, the two countries had agreed to work jointly on an economic project in Afghanistan.