DIG Roopa Moudgil transferred and posted as Commissioner for Traffic and Road Safety. 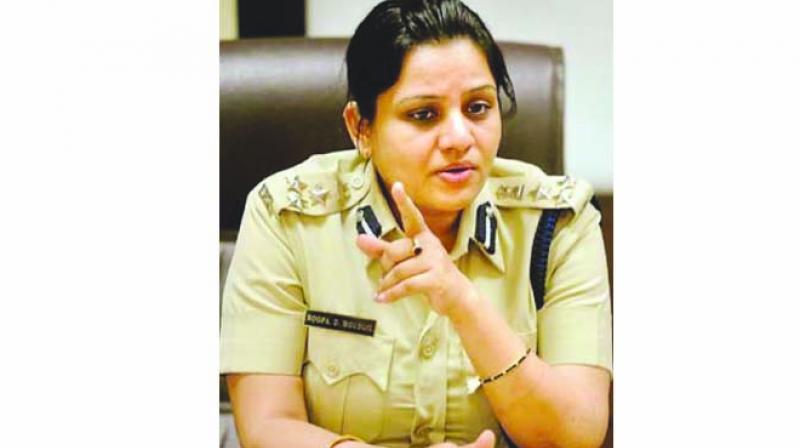 Bengaluru: As a fallout of the charges of corruption and irregularities in the prison department, the two top heads of the prison department — DGP H. N. Sathyanarayana Rao and DIG D. Roopa Moudgil — have been shunted out of the department, while DIG and chief superintendent of the Parappana Agrahara Central Prison, Krishna Kumar, has also been transferred without any posting.

While Mr Rao has been sent on compulsory leave, Ms Moudgil has been transferred and posted as Commissioner for Traffic and Road Safety. This is, perhaps, the first time in the history of Karnataka that an officer of the rank of DGP is being retired unceremoniously, as Mr Rao has not been given any posting, with just 14 days left for him to hang up his boots. Ms Moudgil’s transfer too is being dubbed “punishment transfer”, as her report on the alleged irregularities at the Parappana Agrahara Central Prison had embarrassed the government.

Explaining the reason behind transferring the two officers, the government clarified that the step was taken to maintain the sanctity of the inquiry process and to safeguard it from further interference. The government also stated that the interaction of both the police officers with the media amounted to serious violation of All-India Services Conduct Rules.

“On receiving a report of allegations of irregularities in the prison, the government was quick to institute an Inquiry Commission and had asked to submit a preliminary report of findings within one week and a final comprehensive report  within a month,” the government said.

“In view of this violation, the government issued a show-cause notice to both the officers. The subsequent visit by the concerned officers to Parappana Agrahara Central Prison witnessed disturbance emerging in the jail premises. In order to maintain the sanctity of the inquiry process and safeguard it from further interference, the government has asked the DGP to proceed on leave, while DIG D. Roopa has been transferred as Commissioner for Traffic and Road Safety. The Government is committed to allow the inquiry to proceed unhinged, so that evidence based on truth emerges, following which necessary and strict action will be taken to bring the guilty to book,” said a press release by the Chief Minister’s Secretariat.

Mr Megharikh was heading the Anti-Corruption Bureau and was also the Police Commissioner of Benglauru. As DIG Roopa is posted as Commissioner for Traffic and Road Safety, the officer in that post, ADGP Dr. A.S.N. Murthy, has been posted as ADGP, Forest Cell, in the upgraded post.

Woman officer made in charge of prison
The government, which seems to be on a clean-up drive, has also transferred DIG Krishna Kumar, the Chief Superintendent of the Parappana Agrahara Central Prison, as DIG Roopa’s report had several allegations against him. He has been not given any posting. Meanwhile, the government has given additional charge of his post to Superintendent Anitha R.