Around 20 persons were detained by police after Jharkhand Chief Minister Raghubar Das had ordered a probe into the incident on Tuesday. 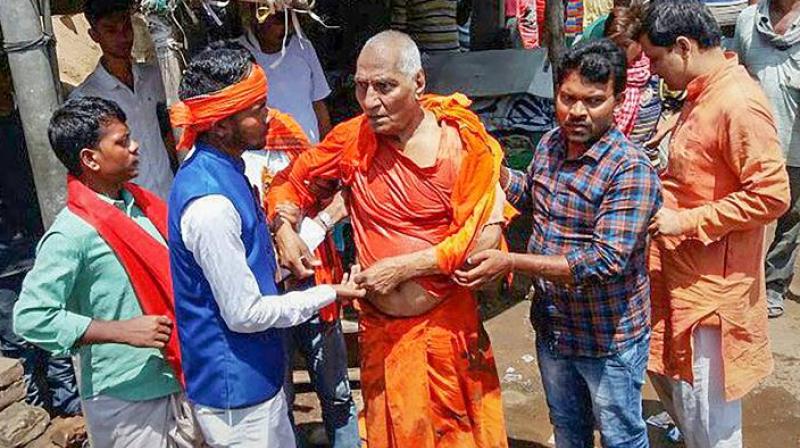 Supporters of Swami Agnivesh said he was dragged on the road, slapped and kicked by BJP workers who had assembled outside his hotel on Tuesday to oppose his presence in the district.  (Photo: PTI)

Patna: A day after being assaulted in Jharkhand’s Pakur town, allegedly by members of BJP – sponsored outfits social activist Swami Agnivesh has demanded a judicial probe into the matter.

“I believe that the attack against me was sponsored by the BJP. I can say this because our team had informed in writing to the district administration about the event and my visit but no security arrangements were made. I demand a judicial probe into the matter so that all those who have been involved can be punished”, Swami Agnivesh said before leaving for New Delhi on Wednesday.

Supporters of Swami Agnivesh said he was dragged on the road, slapped and kicked by BJP workers who had assembled outside his hotel on Tuesday to oppose his presence in the district.

He was rushed to Pakur Sadar Hospital on Tuesday where doctors took his X-ray following a complaint of pain in the chest.

“He has suffered injuries in his left chest area and is likely to meet doctors in New Delhi”, one of his supporters told this newspaper from Ranchi.

Around 20 persons were detained by police after Jharkhand Chief Minister Raghubar Das had ordered a probe into the incident on Tuesday. An FIR was also registered in connection with the assault case under various sections of the IPC including an attempt to murder.

“Eight persons have been named as accused in the FIR. A search operation has been launched to trace them”, Jharkhand ADG RK Malik said.

Sources claim that Swami Agnivesh had been giving statements against the policies of the state government before he was assaulted on Tuesday in Pakur. According to a source from Pakur he had accused the Jharkhand government of displacing tribal people by acquiring their land and allotting it to big corporate houses.

“He was attacked by the mob as soon as he came out of his hotel. The BJP workers were chanting Jai Sri Ram and Agnivesh go back as they dragged and assaulted him on the road”, supporters of Swami Agnivesh said.

They said that the local BJP workers were opposing his presence in the district and blamed him for provoking tribal sentiment at the behest of Christians.

The state unit of the BJP on Wednesday dismissed the allegation levelled by Swami Agnivesh that workers of the party were involved in the incident.

Speaking on the issue Jharkhand Urban Development Minister CP Singh told reporters that, “The allegations against BJP workers are not correct. I know Swami Agnivesh for last 40 years and it seems that he orchestrated the attack on himself. This is not the first time when he has been beaten up he was also assaulted during Anna Hazare movement earlier”.