US-based Pannun, is engaged in radicalising, funding and motivating gullible youths of Punjab into committing acts of arson and violence. 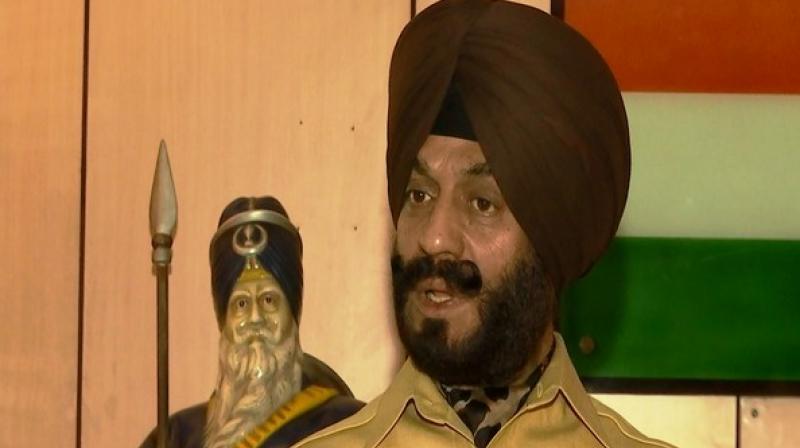 ‘I dare you to come to India. You are an ISI agent collecting fund from them. He is misleading innocent people there. People like him are bringing disgrace to Sikhs across the world,’ he said. (Photo: ANI)

New Delhi: Former politician and chairman of All India Anti-Terrorist Front (AIATF), MS Bitta has come down heavily on legal advisor of Sikhs for Justice (SFJ), Gurpatwant Singh Pannun, alleging him for bringing disgrace to the Sikhs.

US-based Pannun, who runs a pro-Khalistan campaign called 'Referendum 2020', is engaged in radicalising, funding and motivating gullible youths of Punjab into committing acts of arson and violence.

Bitta accused Pannun of collecting funds at the behest of Islamabad and using it for spreading venom amongst the Sikh diaspora. He, however, said that all of their anti-India agenda had suffered a massive failure.

"They could not manage to gather even a thousand people (at Trafalgar Square) while I demonstrated outside their embassy with 12,000-13,000 Sikh youths. I dare you to come to India. You are an ISI agent collecting fund from them. He is misleading innocent people there. People like him are bringing disgrace to Sikhs across the world," he said.

In a reference to the waving of Khalistani flags during a match in the recently-concluded Cricket World Cup in the UK, Bitta said that those people who gathered no traction amongst the Sikh community were hungry for publicity.

"They are hungry for publicity. They sent their people to chant 'Khalistan Zindabad' in stadiums. However, hundreds of true Indians protested against them there also. They get money by shouting slogans. Who will pay them if they do not shout Khalistan all around?" he added.

On being asked about Pakistan's agenda on Kartarpur corridor, Bitta said that Islamabad cannot indoctrinate loyal Sikhs of Punjab and no pure devout can be lured into its sinister designs.

"If you are sincerely devoted to Guru Kartarpur, then you will never get enticed by Pakistan and the pro-Khalistan leaders and will never provoke the people of Punjab. You will never betray your devotion towards the Guru," he remarked.

"There are no Khalistanis in Pakistan but they are the agents of ISI. Today, Punjab is in a very good state. There are no signs of disturbance in the state. Punjab police have been phenomenal in their work. There are no elements of terrorism," Bitta stressed.

Pakistan-sponsored militancy in the late 1980s and early 1990s claimed hundreds of innocent lives in Punjab.

However, extraordinary efforts of government and security forces succeeded in restoring peace in the state. Since then, it is on the path of development and has become one of the most prosperous states of India.