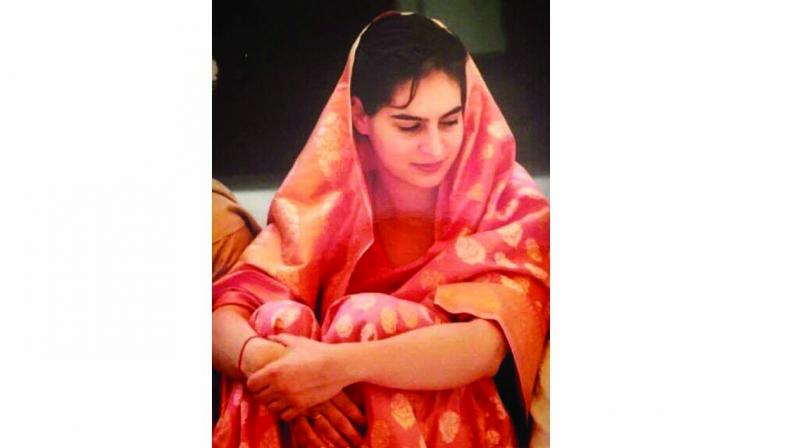 New Delhi: Priyanka Gandhi Vadra was the latest to join the bandwagon of women posting their pictures in Sari on Twitter. Her post led to a rare personal exchange on the social media site with her husband Robert Vadra.

‘#Saree Twitter’ has been trending on the microblogging website, which is flooded with posts from women all over.

Joining the trend, Priyanka Gandhi tweeted a photo showing her in a pink and gold Benarasi saree.

“Morning puja on the day of my wedding (22 years ago!) #SareeTwitter,” she tweeted with her photograph.

The Congress leader who has recently taken over as a general secretary of the party in Uttar Pradesh, said it was a throwback photograph from the day of her wedding.

Her husband Robert Vadra, who professed love for his wife on Twitter and said “love, happiness, support” is the foundation of their being.

Ms Gandhi Vadra was flooded with anniversary wishes following the tweet, prompting her to clarify that her wedding anniversary is in February. “Thanks for all the anniversary wishes...But it’s just a throwback photo for the #SareeTwitter guys, my anniv is in Feb!” Priyanka Gandhi said on the microblogging site.

In a tongue-in-cheek remark, she also tagged her husband Robert Vadra and added, “You can still take me out for dinner”.

Later, Vadra, tweeting from his account, which is unverified, tagged his wife and said: “Wow!! Nice pic, you look the same for me each day. Love, happiness, support is the foundation of our being...Love you lots.”

In another fun post, Congress Rajya Sabha MP Rajeev Gowda posted a photograph of himself in a Sari dressed as Indira Gandhi in a school play.