Coronavirus in India: 1 million in 4 months, 2 million in 3 weeks and peak in September

Coronavirus was somewhat under control until the end of April. Then began the loosening of norms... 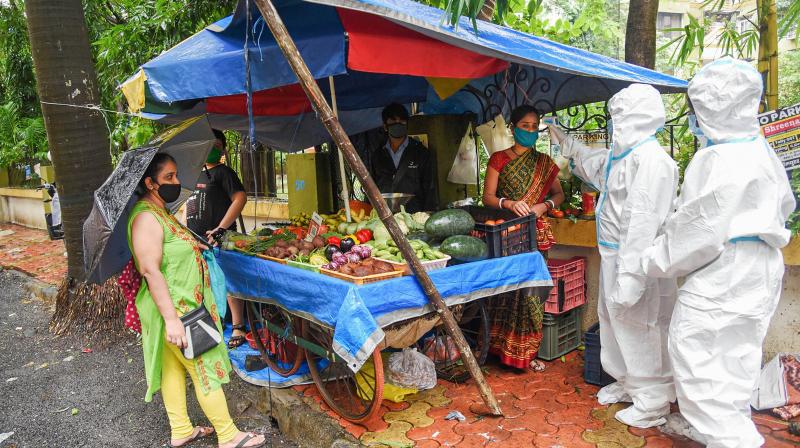 A health worker checks the temperature of a roadside vegetable vendor in the wake of coronavirus pandemic in Mumbai. (PTI)

On Thursday, India crossed the one million mark in total coronavirus cases. As per the official data, India currently has 10,38,716 confirmed coronavirus cases, of which 3,58,692 are still active. That India would cross the 10 lakh mark was a foregone conclusion given the daily and unhindered spurt in cases.

India has been recording over 20,000 corona cases each day since July 2. In the last three days itself, India has added over one lakh cases. It took coronavirus 51 days to go from 1,000 cases to 1,00,000 cases. But the deadly virus took just 59 days to reach the million mark.

The writing was always on the wall. Now the 'million' dollar question on everyone's mind is: When will this pandemic peak in India?

Let us understand what "peaking" means in the pandemic vocabulary. In simple terms, reaching the peak means a situation when the number of active cases begin to level off rather than catch the upward trajectory. This is unfortunately not the case in India right now.

Another study has predicted mid-August as the peak period of the coronavirus pandemic. In early May, AIIMS-Delhi director Randeep Guleria had predicted the peak period to be between June and July. However, the ongoing spurt in cases has negated Guleria's claim.

The virus, meanwhile, looks all set to cross the 2 million mark by August 11.  Dr Rijo M John, a health economist, has said that India is likely to cross the 2 million mark between August 10 and 11. Moreover, he has predicted that India could have 3.2 million cases by August 31. John's previous prediction has proven to be more or less accurate. He had on June 8 said India would cross 1 million around July 22, which the country crossed on July 16.

Public Health Foundation of India president Dr K Srinath Reddy, however, has said that coronavirus could peak in mid-September. But it is not the prediction but what he has said along with it that makes the crucial difference: Government efforts and public behaviour.

"If everybody does what needs to be done...It depends on how the public behaves and the government acts," PTI quoted him as saying. During his interview with PTI, he urged people to follow all precautionary measures like physical distancing and personal hygiene and expressed his disappointment over government's dilution of public health activities.

In fact, he observed that the spread of the virus had somewhat been under control till the second phase of the lockdown. But the gradual loosening of the norms to allow more economic activities, he said, led to the proliferation of coronavirus cases.

It may thus be implied that the confusing timelines of lockdown and 'unlock' implemented by states — for example: Maharashtra and Tamil Nadu  — and the Centre and the breakdown of the public health system across India have only contributed to the spurt in coronavirus cases.

Explicitly, Dr Reddy has added, "Different places (states) would peak at different times", which is only likely to complicate matters further. Implicitly, Dr Reddy has underlined the need for co-operation between the general public and the governing authorities if India's states want to beat coronavirus.