India   All India  18 Jul 2020  COVID-19 likely to peak in India by mid-September if governments act and public behaves
India, All India 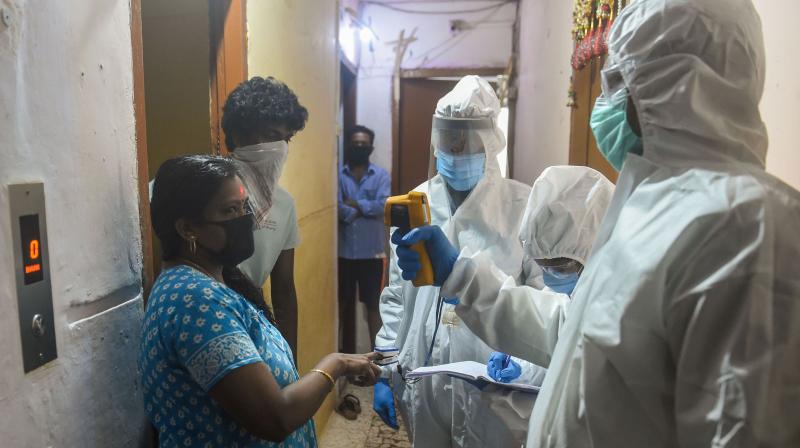 Dharavi has been a COVID-19 success story. (PTI)

Bengaluru: COVID-19 cases may peak in India as early as mid-September provided strong public health measures are in place and people behave in a responsible manner to contain the virus, President of Public Health Foundation of India, Prof. K Srinath Reddy, said on Saturday.

Speaking to PTI, he expressed concern over the microbe spreading with renewed vigour, as confirmed infections and deaths crossed one million and 25,000 respectively in India earlier this week.

"Ideally we could have and should have prevented it reaching this level, but even now we should try our best and contain it as quickly as possible", the public health expert said.

He, however, added that India may see COVID-19 cases peaking as early as in two months if there are strong public health measures and people take all precautions like wearing face masks and maintaining physical distance.

"If everybody does what needs to be done", he said when asked if he is confident that the cases would peak within two months. "It depends on public and government action".

Reddy, who formerly headed the Department of Cardiology at the All India Institute of Medical Sciences, said up to the second phase of lockdown, control measures were very strict as India tried to contain the spread.

But subsequently after May 3, when relaxation started -- resumption of economic activities were important -- very strong levels of public health activities like household survey for any cases with symptoms, quick testing and isolation and vigorous contact tracing, among others, should have been maintained, he said.

"All those precautions...public health measures, as well as personal cautionary measures in terms of how to behave in a public place, started slipping since then, and slipped further after lockdown was fully lifted", according to him. So it appeared as though we were in a "sudden release phenomenon".

It was almost like students celebrating immediately after school exams, even though results were a few months away, Reddy, who presently serves as an Adjunct Professor of Epidemiology at Harvard, said. There has been slipping up of necessary cautions in public gatherings, as well as in public health activity, he said.

"We spent too much time focusing on hospital bed capacity...that was also necessary, but the whole area of contact tracing was left essentially to policemen rather than seen as a public health function", he said.

"Building up strong contact tracing, household surveillance of people with symptoms, getting them tested quickly, all of these measures should have been taken much more".

Not following up with strong public health measures and a dilution of cautionary behaviour in public contributed to the rapid spread of the virus, said Reddy, who has been involved in several major national and international research studies, having been trained in cardiology and epidemiology.

"Our main thing now is to prevent the virus getting deep into rural India. Small towns and rural areas must be protected as much as possible, particularly rural areas because that is where two-thirds of India is. If we can prevent that, we can still prevent the damage", Reddy added.