The six-storey Bhanushali Building in south Mumbai was around 100 years old. 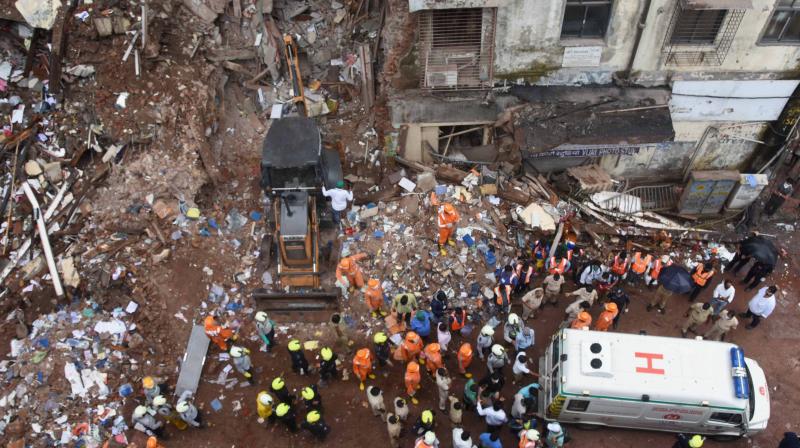 Rescue operations at the site of the building collapse. (PTI)

Mumbai: The death toll in the building collapse in the Fort area of Mumbai has gone up to ten with a 32-year-old man being declared brought dead at hospital on Friday evening, civic officials said.

As per the Maharashtra Housing and Area Development Authority (MHADA) which looks after the maintenance of old buildings in the city after charging a cess, the six-storey Bhanushali Building in south Mumbai was around 100 years old.

A portion of the building caved in around 4.45 pm on Thursday as heavy rains lashed the city.

An elderly woman was taken out from the debris in the morning and rushed to the state-run J J Hospital where she was declared brought dead, they said.

A 35-year-old male and a woman aged 23 were later pulled of the rubble and shifted to the Hospital where they were declared brought dead on Friday afternoon.

A 17-year-old boy, who was critically injured, also succumbed at the J J Hospital in the morning, they said.

A 32-year-old man was rescued from the rubble in the evening, but he was declared dead before admission at the hospital.

In 2019, MHADA had applied for `Intimation of Development (IoD) which the BMC granted, and thereafter it was MHADA's responsibility to get the building vacated and repair it, Municipal Commissioner Iqbal Singh Chahal had told reporters late Thursday evening.

Mumbai Mayor Kishori Pednekar, who visited the site, had said the building had been declared as `C1' category (dangerous structure).

A total of 27 people were rescued -- 13 of them from the intact portions of the building and 14 from the debris.

MHADA said on Friday that the cessed building was about 100 years old. It had given NOC for repairs to six tenants, it said.