Amid growing tensions: India, China hold 16th round of talks 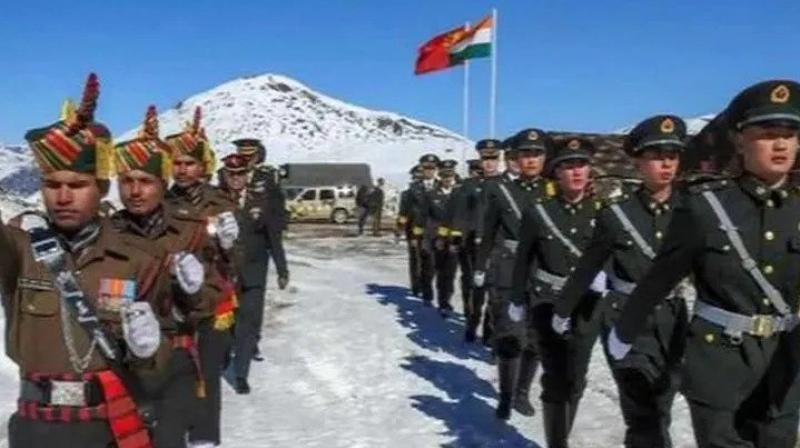 The talks are being held at a time of increased tensions in the skies over the LAC as the Chinese People’s Liberation Army Air Force is carrying out aggressive exercises in the Tibet region. (PTI file image)

New Delhi: Amid heightened tensions in the skies over the Line of Actual Control (LAC), the 16th round of corps commanders’ talks between India and China were held on Sunday to resolve all outstanding issues in the remaining friction points in the Ladakh sector. The latest round of talks are held after a gap of four months, and began at around 9.30 am at the Chushul Moldo meeting point on the Indian side of the LAC.

The talks are being held at a time of increased tensions in the skies over the LAC as the Chinese People’s Liberation Army Air Force (PLAAF) is carrying out aggressive exercises in the Tibet region. In response, India has also increased its air operations in the sector, including carrying out night sorties. IAF Rafale and Su-30MKI aircraft are flying with greater frequency in the region.

The Chief of Air Staff, Air Chief Marshal V.R. Chaudhari, said on Sunday that whenever the PLAAF fighter jets come too close to the LAC, the IAF immediately responds by scrambling its combat aircraft.

“Chinese aircraft activity is closely monitored by us. Whenever we see Chinese aircraft or remotely piloted aircraft coming too close to the LAC, we take appropriate measures by scrambling or putting our aircraft on higher alert. This has deterred them quite a lot,” the IAF chief told PTI.

On whether the Chinese Air Force was trying to provoke India just ahead of the talks, he said: “I can’t point to any particular reason why they are doing it but we are monitoring it and we take immediate action by scrambling our fighter jets there.”

The IAF chief said ever since the Galwan Valley incident in June 2020, “we had started deploying our radars all along the LAC in the eastern Ladakh sector. Gradually, we have integrated all these radars with our Integrated Air Command and Control System so that we are able to monitor the air activity across the LAC”.

Air Chief Marshal Chaudhari said the IAF has also bolstered its surface-to-air-ground weapon capabilities along the northern borders and has also increased the number of mobile observation posts in that area. “We get a lot of inputs from the Army and other agencies deployed there. The Chinese aircraft activity is closely monitored by us,” he said.

Last month the Chinese Air Force flew its aircraft close to the Indian position in one of the friction points at the LAC. In response, the IAF too activated its assets as per standard operating procedures.

There have been other incidents in the past week too when Chinese jets have been flying close to the LAC violating the confidence-building measures as per which the two sides cannot fly within 10 km of the LAC.

At the corps commanders’ meeting, India is expected to press for the disengagement of troops as soon as possible in all the remaining friction points, besides seeking a resolution in Depsang Bulge and Demchok. The Indian delegation at the talks is led by Lt. Gen. Anindya Sengupta, the commander of the Leh-based 14 Corps. The Chinese team was to be led by South Xinjiang Military District chief Maj. Gen. Yang Lin.

The 15th round of corps commander-level talks in March had failed to achieve any breakthrough in further disengagement from the friction points in Ladakh.