With Thursday’s death, the toll rose to 49, 24 districts of Assam largely affected by floods. 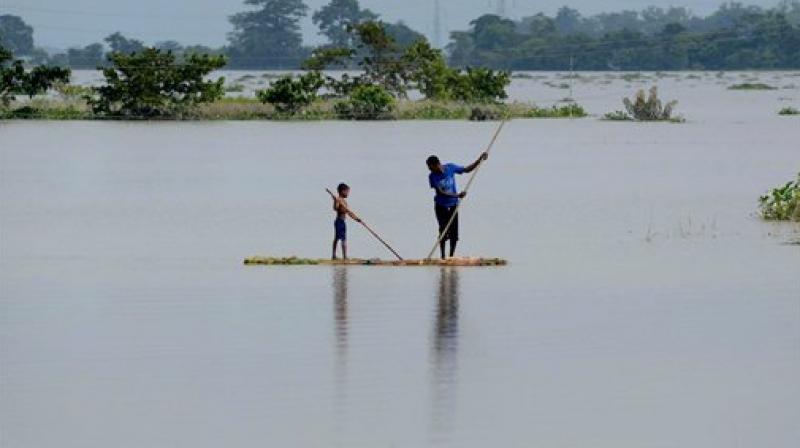 A man along with his child uses a make-shift raft to commute in a flood-hit village in Morigaon district in Assam on Thursday. (Photo: PTI)

Guwahati: The flood situation in Assam remained very critical on Thursday as 10 more people lost their lives while 31.55 lakh are still affected in 24 districts of the state.

With Thursday’ deaths the toll in the latest wave of floods in the state rose to 49.

The overall death figure in this year's flood in Assam is 133.

According to Assam State Disaster Management Authority (ASDMA), three people died during the day in Dhubri, two in Morigaon and one each in Dhemaji, Sonitpur, Barpeta, South Salmara and Nagaon districts, even as the number of affected people came down against Thursday's 33.5 lakh across 24 districts.

Dhubri is the worst-affected with 8.13 lakh people hit, followed by Morigaon with 5.30 lakh people affected by the deluge.

Currently, 2,584 villages are inundated and 1.67 lakh hectares of crop area are damaged, the ASDMA said.

Authorities are running 602 relief camps and distribution centres in 21 districts, where 1,01,035 people have taken shelter. The NDRF, SDRF and district administration personnel have rescued nearly 3,500 people to safer places in many districts.

Currently, the Brahmaputra river is flowing above the danger marks at Guwahati, Nimatighat in Jorhat, Tezpur in Sonitpur, Goalpara and Dhubri towns.

Other rivers like the Dhansiri at Numaligarh in Golaghat, Jia Bharali at NT Road Crossing in Sonitpur, Kopili at Dharamtul in Nagaon, Beki at Road Bridge in Barpeta and Kushiyara at Karimganj town are flowing above their danger marks.

Meanwhile, the Indian Railways Thursday said it has begun restoration work of damaged rail tracks and bridges to restart train services as soon as possible.

"While the overall flood situation continues to be grim in most part of Bihar and railway tracks remains breached in many locations, NF Railway has started restoration work in all locations on a war footing," Northeast Frontier Railway Chief Public Relations Officer Pranav Jyoti Sharma said in a statement.

In Lumding Division also, flood-affected rail tracks between Silghat and Jakhalabandha stations have been restored for movement of traffic at restricted speed," Sharma said.

"Four track maintainers of Katihar Division, Dipak Laskar, Biswajit Dutta Gupta, Lankesh and Rupesh Kumar, who showed extreme presence of mind and extraordinary courage to save Bridge Number 132 from being washed away by flood waters, have been awarded in cash by the General Manager of NF Railway," the CPRO said.

"NF Railway is running special trains from Guwahati to Dalkhola and from Dibrugarh to Guwahati for clearance of rush caused by cancellation of trains due to the floods," the statement said.

On Wednesday, the NF Railway had announced that all trains to the northeast from the rest of the country have been cancelled till August 20 due damages on rail tracks by floods, which have caused havoc in Assam, West Bengal and Bihar.