Abdullah was concerned over 'unsatisfactory response' of Centre, State govts in putting up a strong case before SC in favour of Article 35A. 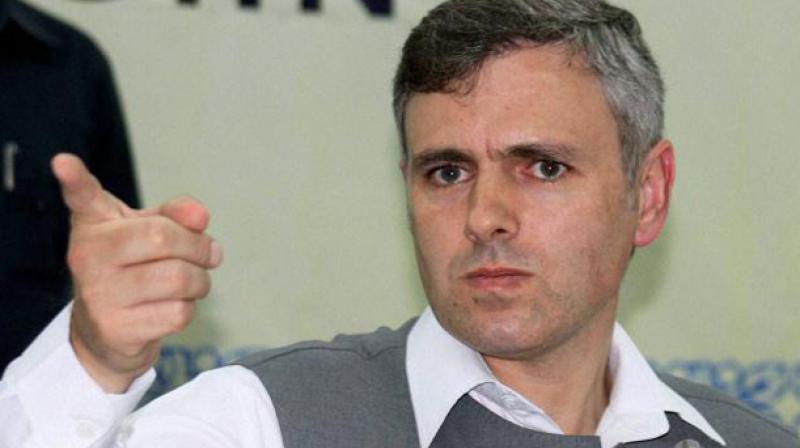 Abdullah said in a statement in Srinagar that the issue is of vital importance for the people of Jammu, Kashmir and Ladakh, as abrogation of Article 35A will have serious ramifications. (Photo: PTI)

Srinagar: Former Jammu and Kashmir Chief Minister and working President of Opposition National Conference (NC), Omar Abdullah on Friday asked for convening a special session of the State legislature before August 29 “to frame up an appropriate response to counter the narrative with regard to tampering or repealing of Article 35A of the Constitution.

Independent MLA and leader of regional Awami Itehad Party (AIP) Eng. Sheikh Abdur Rashid has also demanded that a special session of the J&K legislature be convened to discuss the issue.

Abdullah said in a statement in Srinagar, “The issue is of vital importance for the people of Jammu, Kashmir and Ladakh, as abrogation of Article 35A will have serious ramifications”.

He expressed grave concern over the “reported unsatisfactory response” of the Central and the State governments in putting up a strong case before the Supreme Court in safeguarding Article 35A.

Abdullah said that the observation of the Centre’s attorney that the issue needs wider discussions has created apprehension in the public mind about intentions of the BJP-led NDA government. “And, in such a precarious situation, the State legislature will have to take a call on this fundamental issue, especially as the Constitution empowers the Legislative Assembly to determine the issues with regard to permanent residence”, he said.

The NC leader appreciated general consensus across Jammu and Kashmir, irrespective of caste, creed, religion or region, with regard to preserving of this significant constitutional guarantee bestowed upon the State by the Constitution of India. “It is therefore appropriate to have the aspirations of the people reflected through the State legislature”, he said.

He hoped that the people of Jammu and Kashmir “will rise above party politics and fight every overt or covert attempts to trample Article 35A, which is regional neutral, religious neutral and ethnic neutral”. He said abrogation of this proviso is detrimental to every segment of society in Jammu and Kashmir.

On Thursday, the BJP accused Abdullah of hoodwinking the people of Kashmir on Article 35A. The party spokesman Virendra Gupta said that the people of the Kashmir were settling in Jammu region of the State under a “design” even as they vehemently oppose separate settlements for Kashmiri Pandits and Sainik Colony for the defence personnel in the Valley.

“Omar Abdullah is fooling the people of the State by saying that Article 35A does not allow any sex or gender or regional discrimination. The matter of the fact is that the State Subject law (of 1927) and Article 35A are basic issues that not only allow discrimination on the basis of sex but also violate Articles 14 and 16 of the Indian Constitution,” he asserted.

Article 35A empowers the J&K Legislature to define “permanent residents” of the State and provide special rights and privileges to those permanent residents. It was added to the Constitution through a Presidential Order in 1954 issued by the the-then President in exercise of the powers conferred by clause (1) of Article 370 of the Constitution, with the concurrence of the Government of the State of Jammu and Kashmir. Article 370 guarantees a special status to Jammu and Kashmir within the Indian Union.

However, a petition seeking removal of Article 35A is currently pending before a three-judge bench of the Supreme Court. An NGO, ‘We the Citizens, believed to be an RSS think-tank, challenged 35A in the SC in 2014 on grounds that it was not added to the Constitution through amendment under Article 368 and that it was never presented before Parliament, and came into effect immediately. In another case filed in the SC in July, two Kashmiri women argued that the State's laws, as part of Article 35A, had disenfranchised their children.

Earlier in August, the SC sought the response of the Centre on yet another plea challenging the validity of Article 370. The petition challenged the April 11 order of the Delhi High Court rejecting a plea saying nothing survives in it as the Apex Court has already dismissed a similar prayer on the issue.