Ram Rajya means home for all, no poverty, discrimination: Adityanath

Adityanath hit out at critics claiming that there were some who opposed and questioned his actions regardless of what he did. 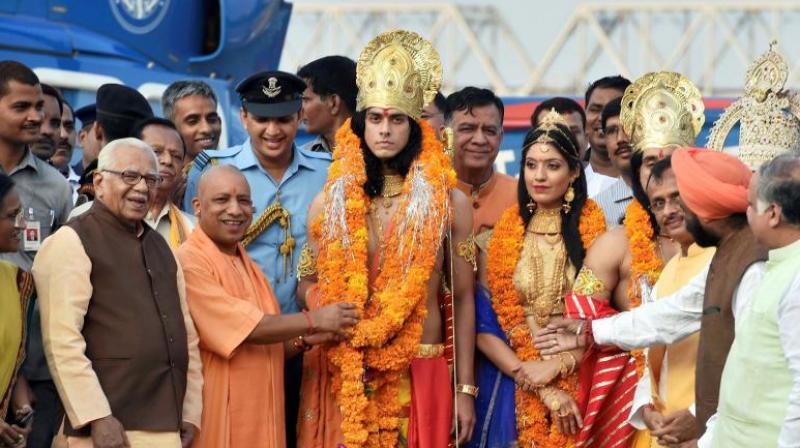 Uttar Pradesh Chief Minister Yogi Adityanath said on Wednesday that no politics should be seen behind his government's efforts to develop this temple town. (Photo: PTI)

Ayodhya: Seeking to deflect Opposition criticism, Uttar Pradesh Chief Minister Yogi Adityanath on Wednesday said that no politics should be seen behind his government's efforts to develop the temple town of Ayodhya, which gave the idea of 'Ram Rajya' – where there is no poverty or discrimination.

"Ayodhya gave the concept of Ram Rajya - where there is no poverty, pain, grief or discrimination," Adityanath said adding that the real meaning of Ram Rajya is a home for everyone and electricity and LPG cylinders for every household

Speaking at the glittering 'Deepotsav' organised on the bank of river Sarayu in Ayodhya on Diwali eve, Adityanath hit out at critics claiming that there were some who opposed and questioned his actions regardless of what he did.

"There are some who are used to opposing everything we do. If I come to Ayodhya they raise questions and if I don't they say I am afraid of coming here. Now they are saying that the Ayodhya programme is to divert the attention of people. I am here with my work, including loan waivers, wheat purchase etc, done in the past six months," he said.

Attacking opposition parties, the UP chief minister said his government did not discriminate on the basis of caste or religion unlike what used to happen earlier.

"We don't discriminate on the basis of caste, creed and religion. In the previous 'Ravan Raj', there was discrimination on basis of family, caste and other factors," he said.

The chief minister said he found it below dignity to even react to "insulting and dirty" allegations levelled by the Opposition.

Beginning his speech with 'Jai Shri Ram' and 'Bharat Mata Ki Jai' slogans, Adityanath said Ayodhya has much to humanity.

"It gave the concept of Ram Rajya, where there is no poverty, pain and grief. Where there is no discrimination. The objective of the programme is to present the real picture to the entire world," he said.

Adityanath also compared the Narendra Modi government's work for the masses at the Centre with Ram Rajya. He also wondered as to why there were negative discussions on Ayodhya.

"We are making an attempt to take it from negativity to positivity. I am happy all Ayodhya residents cooperated in this endeavour. Ayodhya remained neglected, faced attacks continuously, but it will not remain so. We have launched Rs 133 crore schemes here," he said.

The chief minister said this was first of the four phases planned for Ayodhya.

"There will be beautification of Ayodhya and its ghats. This effort will continue in other historic places. Be it Kashi, Mathura, Namisharayna (Sitapur), Mirzapur, Tulsipur (Balrampur), Saharanpur, we will develop historical places. The state should become a world tourism hub and it is a beginning from Ayodhya," he said.

The chief minister said he wanted to restore the ancient glory of Ayodhya. Referring to the 1.71 lakh earthen lamps being lit on the bank of river Sarayu, Adityanath said the figure matched the population under the Ayodhya Nagar Nigam.

Officials said that the 1.71 lakh earthen lamps being lit at an event could enter the Guinness Book of World Records.

In his speech, UP Deputy Chief Minister Keshav Prasad Maurya said that "those opposed to Lord Ram cannot stop us from developing Ayodhya".

Adityanath said that a 'Ramayan mela' will be associated with this programme next year onwards.

UP Governor Ram Naik lauded the efforts of the Adityanath government in developing Ayodhya and thanked him for this assurance that all the work would be completed in two years, before his (Naik's) tenure ends.

After the main event, the stage was set for a grand laser show and 'aarti' (worship) of river Saryu.