The truck driver died on the spot in the accident but no casualty of any train passenger was reported, officials said. 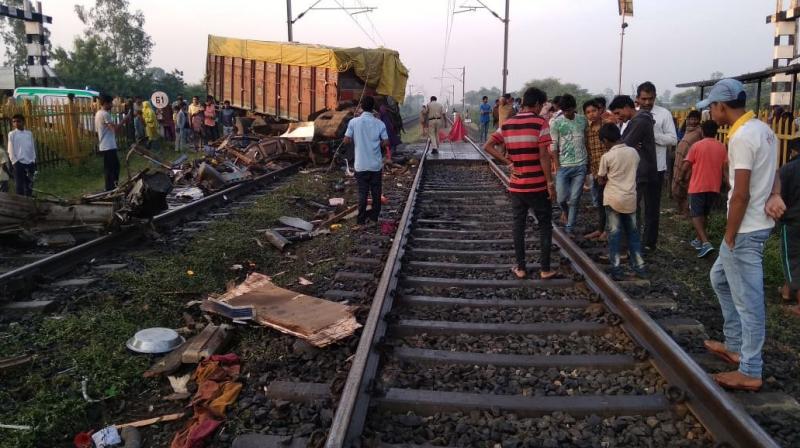 The accident took place between 6:30 am and 6:45 am when truck rammed into train after breaking closed level crossing gate on Sajeli road between Thandla and Meghnagar railway stations. (Photo: ANI)

Jhabua (Madhya Pradesh): Passengers of the New Delhi-bound Rajdhani Express had a narrow escape on Thursday when a speeding truck rammed into it, resulting in derailment of two of its coaches at a railway crossing in Madhya Pradesh's Jhabua district, officials said.

The truck driver died on the spot in the accident but no casualty of any train passenger was reported, they said.

The accident took place between 6:30 am and 6:45 am when the truck rammed into the train after breaking the closed level crossing gate on Sajeli road between Thandla and Meghnagar railway stations, Jhabua district's Superintendent of Police Mahesh Chandra Jain said.

No train passenger was injured, Ratlam Divisional Railway Manager (DRM) R N Shankar said, adding that the Rajdhani Express was on its way to Hazrat Nizamuddin from Thiruvananthapuram when the accident took place.

All passengers of those coaches were accommodated in the remaining coaches, including the air-conditioned ones, and the train later left for its onward journey, he said. "We are trying to restore rail traffic on the affected line soon," the official said.

The sand-laden truck, registered in Gujarat, was severely damaged in the mishap, a police official said.

The deceased truck driver was identified as Salim (35), a resident of Vadodara district in Gujarat.

Jhabua collector Ashish Saxena and senior railway and district administration officials reached the spot along with other staff to provide relief to passengers.