Several outfits called for a 12-hour shutdown. Most of the shops are shut and vehicles are off the roads. 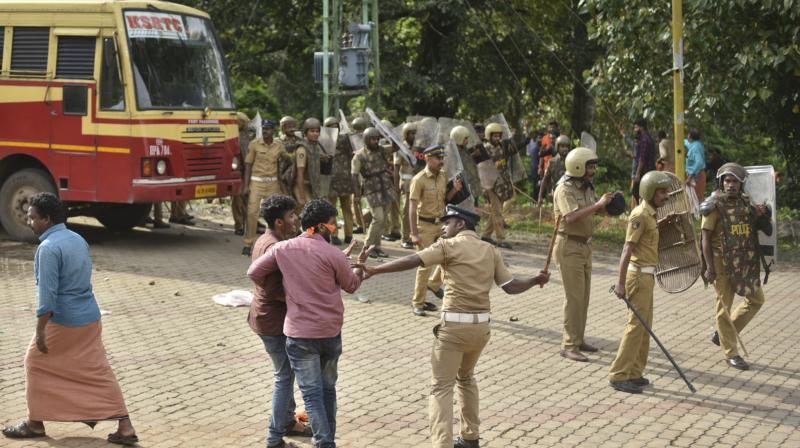 A policeman charges his baton at protestors who tried to block women of menstruating age from going to the Sabarimala temple at Nilackal, a base camp on way to the mountain shrine in Kerala. (Photo: AP)

Kochi: Protests and violence gripped parts of Kerala when the doors of the Sabarimala temple were opened for women of all ages on Wednesday following the Supreme Court’s historic verdict on September 28.

Following intense protests, the state government has imposed Section 144, banning assembly of four or more people has been imposed in parts of Kerala today.

On day 2, several outfits called for a 12-hour shutdown. Most of the shops are shut and vehicles are off the roads.

Journalist Suhasini Raj working with New York Times, and her colleague, a foreign national, attempted the trek early on Thursday morning and made it halfway with police protection. The two, who claimed to not be devotees, had to return from mid-way after being stopped by protesters.

Meanwhile police said, "When she (Suhasini Raj) reached Marakoottam,she decided to come back after seeing the crowd. Police was ready to take her."

On Wednesday, two women devotees who attempted the trek up to the shrine were forced to return following intimidation from angry protesters.

The state BJP has decided to support to the bandh, while Congress leader Ramesh Chennithala has said that the key issue in Sabarimala was "not one of gender equality."

Barring the Left government, the Congress, BJP and Hindu groups are ranged against the Supreme Court order last month lifting ban on entry of menstruating age to enter Sabarimala.

"The CPI-M-led government has not even cared to file a review petition while the BJP and RSS are out to create problems. Here the issue is of faith and traditions," said Chenithala.

According to devotees, the deity in the temple, Lord Ayyappa is eternally celibate, women between age of 10 to 50 years were barred from entering the temple.

Protesters vandalised media vehicles and threw stones at the police. Women health workers and police constables on duty were also not spared.