Sabarimala Temple visit: Some fired, others forced to quit job

The 32-year old Reshma is mulling to climb Sabarimala in the company of a few other women Ayyappa swamis. 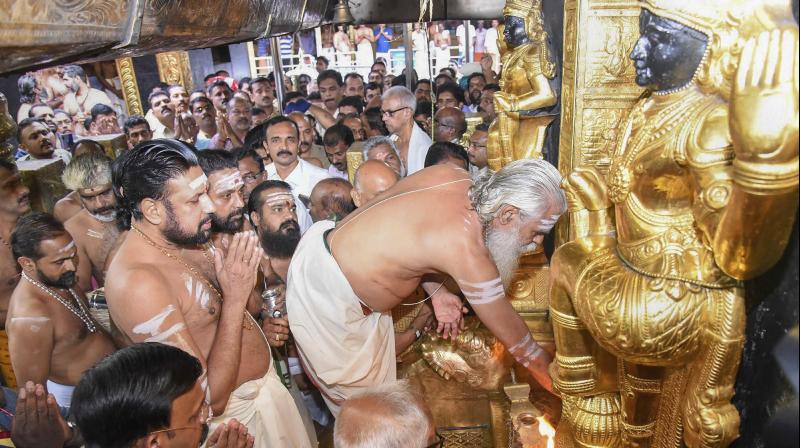 Melsanthi Unnikrishnan Nampoothiri opens the Sabarimala temple for the five-day monthly pooja in the Malayalam month of 'Thulam', Sabarimala on Wednesday. (Photo: PTI)

Kozhikode: The conflict between modernity and conservatism took the toll of jobs for two young women who announced their plan to go Sabarimala. Reshma Nishanth of Irinavu in Kannur, who was on a 41-day “vrutha” has to quit the teaching post at an unaided college as she cannot step outside.

“My husband or relatives cannot provide escort on all the 41-days on the way and back to college. Hence I quit the job,” she says. A group of people claiming to be Ayyappa devotees led a torch-light protest march to her house on the night of October 14. The abuses against her on social media ranges from “she wants to be popular at the cost of maligning Hindu religion” to “she is the puppet in the hands of Communist party to abuse Hindu dharma”. Gauging the mood, she said that she would do the “Kettum Nira” (The ritual where the Ayyappa devotee prepares his/her bag to go to Sabarimala) from somewhere else.

The 32-year old Reshma is mulling to climb Sabarimala in the company of a few other women Ayyappa swamis. Soorya Devarchana, another young woman who is on “vruta” and now staying in Kozhikode was fired from her job. In her Facebook post, she said that she had been fired apparently due to her decision to go to Sabar-imala. It’s not clear where she was working and Ms Devarchana was unavailable for comment. But the mounting pressure has not dampened the spirit of Mrs Nishanth.

She pins all hopes on the state government. “I am aware of the protest, blockade and chaos at Nilakkal since the past two days. But I trust that police will give protection to all the devotees who want to see Lord Ayyappa,” she said.