Ethiopian Prime Minister Abiy Ahmed Ali won the Nobel Prize for Peace for his efforts to resolve the border conflict with neighbouring Eritrea. 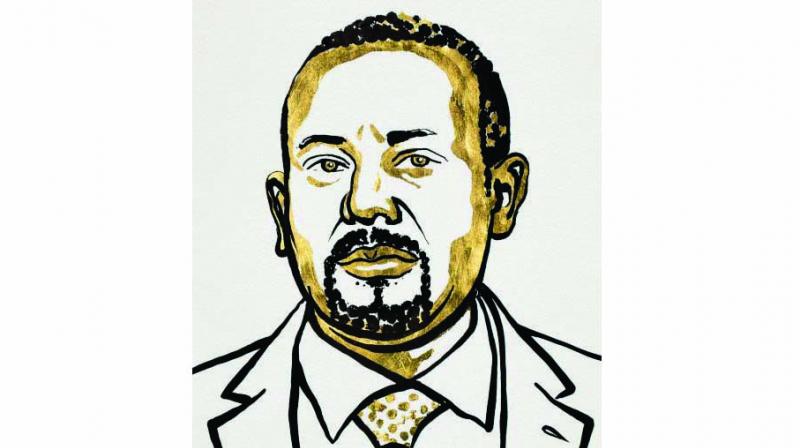 A fighter for peace
Ethiopian Prime Minister Abiy Ahmed Ali won the Nobel Prize for Peace for his efforts to resolve the border conflict with neighbouring Eritrea.

Eritrea was part of Ethiopia when it ended a 3500-year old dynastic rule in 1974. However, the people of Eritrea wanted a separate country and took to agitation which became a success in 1991 with the formation of a separate country. But the two nations had a dispute over a small border town called Badme which grew to become a full blown war in 1998. The two nations were at war for the next two decades which killed thousands of people.

As soon as Abiy Ahmed became Prime Minister in April 2018, he opened talks with Eritrea, which was led by its President Isaias Afwerki. In four months, they signed a peace agreement in which he agreed to a UN-brokered deal to give up claim on Badme. The move brought peace between the two nations after 20 years and its peoples started to move to each other’s country. Ethiopia  is today one of the fastest growing economies of the world. He also lifted all controls on democratic rights and freed its people.  Ethiopia now hopes to usher prosperity through peace and by saying ‘no’ to war.

More than fifty years into writing, and having produced a great numbers of works in different genres spread across novels, essays, note books, dramatic works and screenplays, Handke has established himself as one of the most influential writers in Europe after the Second World War. One of his best-known works is the novel The Goalkeeper’s Anxiety at the Penalty Kick.

His debut novel Die Hornissen (1966) was an experimental double fiction in which the main character would recollect fragments of another novel. A man who never minced his words while giving vent to his feelings, he turned to the New Novel-movement in French literature (le Nouveau Roman) for his own literary inspiration.

Handke works are notable for their extraordinary attention to landscapes and the material presence of the world, which has made cinema and painting two of his greatest sources of inspiration.

He has, however, been criticised for his stance during the Yugoslav war of the 1990s and for his portrayal of the Serbia as the true victim, though he had his roots in Slovenia. Serbian leader Slobodan Miloševic was tried as a war criminal but Handke chose to shed a tear for him when he died.

For study on oxygen and cells
Oxygen has a key role in sustaining life. But does anyone know how the cells perceive a change in the level of oxygen availability and function accordingly? For example, there is a difference in oxygen availability when one dives into the water. How do they react? This year’s Nobel Prize for Physiology or Medicine has been awarded to William G. Kaelin Jr, Sir Peter J. Ratcliffe and

Gregg L. Semenza for shedding light on cellular responses at the molecular level to these alterations.

When the oxygen level is depleted, cells produce HIF (a hypoxia-inducable factor). This will accelerate the function of the genes behind erythropoietin hormone production, resulting in the increased production of oxygen-carrying red blood cells.

It was discovered in 1995 by researchers led by Dr Semenza. The role of the VHL protein in regulating HIF levels was recognised by Dr Kaelyn. Dr Kylin and Dr Ratcliffe were instrumental in unraveling the secrets of the intersection of HIF and VHL.

Their research focuses on how differences in oxygen availability can affect cell metabolism and life function. This achievement has resulted in opening innovative treatment options for a range of diseases including anemia, cancer and heart disease.

For developing lithium-ion battery
Lithium-ion batteries, used in mobile phones and laptops, are part of our lives today. These lightweight, portable, rechargeable and efficient batteries are environmentally friendly as it helps reduce fossil fuel consumption. It is for the discovery of this battery that scientists John B. Goodenough, M. Stanley Whittingham and Akira Yoshino were awarded the Nobel Prize this year.

Dr Whittingham was engaged in research on superconductors during the oil crisis of the 1970s. It was found during the period that titanium disulfide can be used as cathode in the lithium ion battery. He also learned that lithium ions could be trapped between its layers with metallic lithium as partial anode. Lithium, which is very active, however, was not safe to use in batteries in its original form as they could result in explosions.

Dr Goodenough came up with a solution to that problem in 1980. He found that titanium disulfide can be replaced with cobalt oxide as cathode. In 1985, Dr Yoshino built a more secure lithium ion battery using cobalt oxide cathode and petroleum coke anode.

Exploring the mysteries of the universe
James Peebles, Michel Mayor and Didier Queloz were awarded the Physics Nobel Prize for their breakthroughs in the human understanding of the evolution of the universe.

Dr Peebles formulated theories that shed light on the structure of the universe. He unlocked many cosmic mysteries through a detailed study of the cosmic background radiation left behind by the Big Bang. His theoretical analysis that only 5 per cent of the universe is visible and that the remaining 95 per cent is dark matter helped fill in many of the gaps in our understanding of the complexities of universe. He made important studies that led to the finding that cosmological expansion is on the rise.

The discovery also helped science’s quest to find other solar systems, terrestrial planets or habitable celestial spheres and if life exists anywhere out there.

The Sveriges Riksbank Prize in Economic Sciences in Memory of Alfred Nobel, which is also known as Nobel Prize for Economics, was awarded this year to India-born Abhijit Banerjee, Esther Duflo and Michael Kremer “for their experimental approach to alleviating global poverty.”

This year’s Prize has several unique points to it. One, it was the golden jubilee year of the Prize (the first one was awarded in 1969). Second, and most importantly, the award was given to three people who come to their conclusion on the ways to reducing poverty not by theorising alone but by conducting experiments among the people.

Dr Banerjee and Dr Duflo co-founded Abdul Latif Jameel Poverty Action Lab (J-PAL) in 2003, along with a third co-founder, Sendhil Mullainathan. It is now a global network of antipoverty researchers that conducts field experiments. Like students and researchers do experiments in physical or physical sciences in the laboratory.

One of their experiments was to study how deworming children could help their education or whether giving free meals and free resources (including books) really help them.

The Royal Swedish Academy noted that “the research conducted by this year’s laureates has considerably improved our ability to fight global poverty. In just two decades, their new experiment-based approach has transformed development economics, which is now a flourishing field of research.”

The activist writer
The Polish novelist, public intellectual and activist Olga Tokarczuk was this year chosen for the Nobel Prize for Literature for the year 2018. The Swedish Academy had last year cancelled the selection process following some controversies.

Tokarczuk was cited by the committee for her “narrative imagination that with encyclopedic passion represents the crossing of boundaries as a form of life”.

Tokarczuk won the Man Booker International prize for her novel, Flights in 2018. Tokarczuk has been a truthful storyteller who is not bothered about her nationalistic moorings. Her most recent novel, The Books of Jacob, is about an 18th-century religious leader Jakub Frank, who led forcible conversion of his Jewish followers to both Islam and Catholicism at various points. The book sought to break the myth that Poland was not just a victim of centuries of oppression but was, at times, an oppressor, too. She has often taken the floor when it came to social and political changes in her homeland. She continues to oppose the government’s policy which advocates that  writers and filmmakers must not reopen the country’s national wounds such as the instances in which Poles gave their Jewish countrymen up to the Nazis during the Second World War. She espouses the cause of tolerance, feminism and European unity in her works.