A message was flashed to all police units in the Kashmir Valley by the SSP Police Control Room, on behalf of Inspector-General of Police 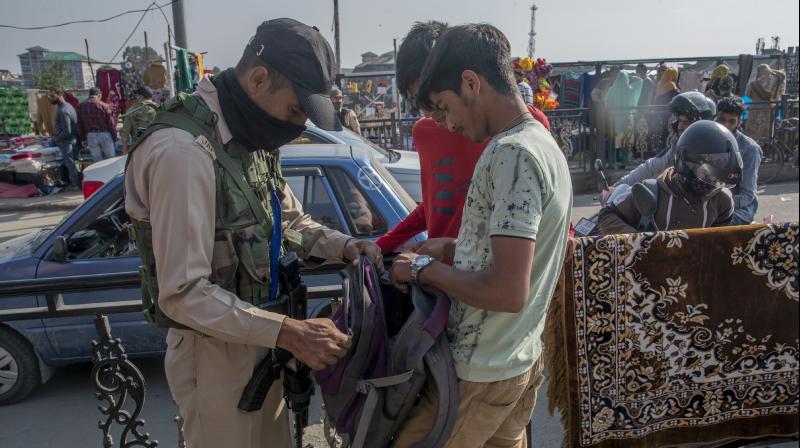 A police officer searches the bag of Kashmiri men in Srinagar, Kashmir on Oct. 12, 2021. (AP/Dar Yasin)

Srinagar: Police in the Kashmir Valley were asked to bring non-local labourers and other workers to nearby police stations or other security establishments, after two more labours from Bihar were killed by militants, and another injured on Sunday.

A message was flashed to all police units in the Kashmir Valley by the SSP Police Control Room, Kashmir, on behalf of Inspector-General of Police Vijay Kumar late in the evening, asking for bringing the non-local labourers and other workers to nearby police stations or other security establishments.

Earlier, two more Hindu seasonal labourers from Bihar were shot dead by unidentified assailants in Kashmir Valley on Sunday evening. A third was injured in the terror attack, the officials said.

While Raja and Joginder Reshi died on the spot, Chun Chun Reshi injured in the attack was rushed to the Government Medical College (GMC) Hospital in neighbouring Anantnag where his condition is stated to be stable. "He has received firearm injuries in the back and arm," medical superintendent, GMC, Anantnag, Dr Iqbal Sofi, was quoted as saying by local news agency GNS.

The security forces have laid siege to the area to capture the assailants dead or alive, the officials said.

The J&K police has blamed The Resistance Front (TRF) which it insists is "offshoot" of proscribed Lashkar-e-Tayyaba (LeT) organisation for most of the 32 targetted killings that have taken place in the Valley so far this year, and also many other terror activities in J&K.

On Saturday, Inspector General Vijay Kumar had claimed that at least five of those involved in these gory attacks are among the 13 militants eliminated by the security forces in the past one week.

J&K's Lieutenant Governor, Manoj Sinha, had earlier during the day vowed to hunt down the perpetrators as well as their sympathisers to bring them to justice. He said in his monthly radio programme 'Awaam ki Awaaz (the voice of people)', "I pay my heartfelt tributes to the martyr civilians and condolences to the bereaved families. We'll hunt down terrorists, their sympathisers and avenge every drop of innocent civilians' blood."

Paying tribute to nine Army personnel including two Junior Commissioned Officers (JCO) killed in the ongoing gunfight with militants in frontier Poonch-Rajouri region, Sinha urged the people to remember the security personnel who have laid down their lives in the line of duty.

He said, "When we light the Deepawali lamps next month, let's light one lamp in remembrance of the martyrs among the security forces who were prematurely snatched from us by the enemies of humanity."