Meanwhile, two Central Reserve Police Force (CRPF) jawans and as many civilians were injured in a grenade blast in Palhalan township 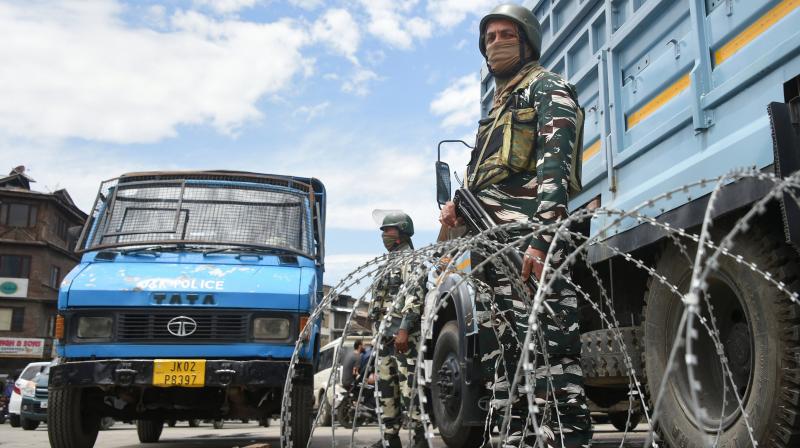 A report from Baramulla said that two CRPF jawans and two civilians were injured in a grenade attack on a police party in Palhalan township. Representational Image. (PTI)

Srinagar: Five separatist militants including a commander of The Resistance Front (TRF), which the police authorities insist is an ‘off-shoot’ of proscribed Lashkar-e-Tayyaba (LeT) organization, were killed in two separate gunfights in Jammu and Kashmir’s southern Kulgam district on Wednesday.

In neighbouring Pulwama district, the police claimed that it arrested two LeT 'associates', before they could set two Improvised Explosive Devices (IEDs) off to target the security forces. Meanwhile, two Central Reserve Police Force (CRPF) jawans and as many civilians were injured in a grenade blast in Palhalan township of northwestern Baramulla district on Wednesday.

A police spokesman here said that the gunfights occurred in Kulgam’s Pombay and Gopalpora villages on Wednesday afternoon when the security forces moved in to flush out militants dead or alive. He said that among the five militants killed in the encounters was TRF district commander Afaq Sikander.

Earlier the police had claimed that two militant ‘associates’ of the LeT were arrested by it along Pulwama’s Circular Road. “A joint naka was laid by the Pulwama police, the Army’s 55 Rashtriya Riles and the 182nd Battalion of the CRPF at Circular Road of Pulwama which arrested two active associates of  LET namely Amir Bashir Dar and Mukhtar Ahmad Bhat,” the police said. It added, “Two ready-to-use IED’s were recovered from their possession”.

A report from Baramulla said that two CRPF jawans and two civilians were injured in a grenade attack on a police party in Palhalan township.

Meanwhile, a massive search operation was earlier during the day launched by the Army in the Uri sector along the Line of Control (LoC) in Baramulla district following it foiled an infiltration bid from across the de facto border.

The Army sources said that the infiltration bid was made by a group of heavily armed men near Dhulanja post in Rewand Nallah area of Uri sector. Later the whole area was cordoned off and the search operation launched, the sources said, adding that a brief exchange of fire took place between the Army troops and the armed group but no casualties were reported.