CJI said that the bureaucratic approach is, 'We don’t do anything, let court pass orders and we will put our signatures and forward them' 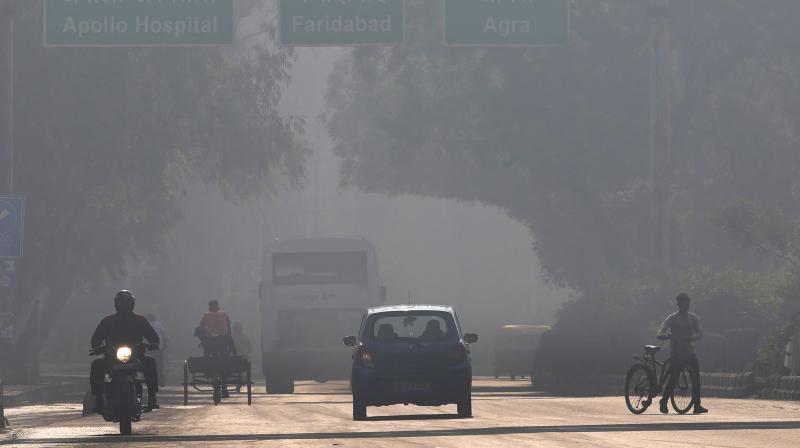 A motorcyclist drives on the wrong side of the road amidst morning haze and toxic smog in New Delhi, India, Wednesday, Nov. 17, 2021. (AP Photo)

New Delhi: Once again expressing its disappointment with the outcome of the “emergency” meeting of the Commission for Air Quality Management in National Capital Region and adjoining areas for failing to come up with concrete steps to deal with the worsening air pollution, the Supreme Court on Wednesday said that bureaucracy has developed inertia and does want to take decisions, expecting courts to pass orders.

Taking a dim view of the long-term steps emerging from the earlier meeting that took place on Sunday (November 14), the court had ordered the convening of an emergency meeting on Tuesday to decide on the immediate steps to deal with the alarming pollution.

Observing that the Commission should have taken a call directing concrete measures including the shutdown of activates contributing to pollution and all this would  have required a little time and not hours long meeting, Chief Justice N.V.Ramana heading a bench also comprising Justice D.Y. Chandrachud and Justice Surya Kant said, “What I am observing is, as a judge and before as an advocate general that bureaucracy has developed a sort of inertia. They don’t want to make decisions, they only want how to stop a vehicle etc., everything we have to do.”

Describing the attitude of the executive as “unfortunate”, CJI Ramana said that the bureaucratic approach is, “We don’t do anything, let court pass orders and we will put our signatures and forward them."

As solicitor general Tushar Mehta urged the court not to pass any further orders and let the decisions taken during Tuesday meeting have their play till November 21, Justice Surya Kant referring to a forecast of Meteorological Department said, “By November 21, nature will come to your rescue” as there will be an expected change in wind direction."

While not passing any order and posting the matter for hearing on November 23, the court said that Punjab, and Haryana will continue to pursue their farmers and persuade them to suspend stubble burning.

Continuing with the position that farm fires and stubble burning can’t be targeted for aggravating pollution, Justice Surya Kant slammed those living in “five star and seven stars” comforts but indulging in farmer bashing without asking how a farmer with land holding of three to four acres can buy an expensive stubble-removing machine.

"People sitting in 5 stars in Delhi keep blaming farmers... After agrarian laws, what happened to their landholdings? With such small landholdings, can they afford these machines? If you actually have any scientific alternative, propose it to them, they'll adopt them," Justice Kant said.

The bench further observed that while it has been acknowledged by both the Centre and the Delhi government that sources like transportation is a major source of pollution, "gas guzzlers and hifi cars" are still plying on Delhi roads and nothing is being done.

For the purpose of sowing wheat, farmers have to remove stubble and have a narrow window of 15 to 20 days, Justice Surya Kant said, pointing to the time constraints that farmers were faced with.

Reacting to the Centre’s argument that the Kejriwal government’s decision asking its staff to work from home would have a limited impact whereas curtailment of its staff would have an all India bearing, Justice Surya Kant said  why can’t there be special buses originating from government colonies,  in which all the staff starting from group ‘A’ officers to group ‘D’ staff can commute in the morning and after office hours.

Appreciating some of the decisions taken by Delhi government including closing schools and asking its staff to work from home, the court was not impressed by its (Delhi government) position that on other issues like shutting down industry engaged in non-essential activities will not be effective, unless it was matched by similar steps by the states in the national capital region.

Delhi government also informed the court that it has sanctioned the funding of 15 road dust sweeping machines and 16 water sprinkler machines.

As senior lawyer Abhishek Manu Singhvi appearing for Delhi government said that 90 per cent of what the Centre has said in its affidavit has already been done by Delhi government, the court asked if Delhi government was saying that nothing more was required to be done.

Justice Chanbdrachud asked Mr Singhvi, “What steps you have taken, what steps you propose to take in the next few days to further deal with the problem of pollution."

Appearing for the petitioner Aditya Dubey and another student suffering from lung ailments, senior lawyers Vikas Singh said that nothing extra was required to be done except for enforcing the existing regulations. He told the court that with Euro VI emission norms in place there was no scope for vehicular pollution, similarly the thermal power plants have to adopt technologies to check emission of smoke and regulation on construction activities have to be enforced.